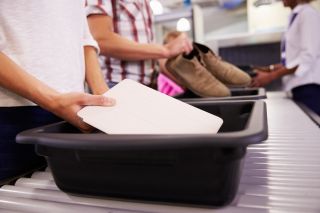 Airports across the world see tens of millions of passengers annually, so it should come as no surprise that the sprawling spaces are filled with icky pathogens of all kinds. But according to a new study from Finland, the areas in the airport that are the most germ-covered aren't the ones you're probably thinking of.

Instead, it's the plastic bins at the security checkpoints that have the most germs. (Sorry, airport bathrooms.)

In the study, researchers from the University of Nottingham in the U.K. and the Finnish National Institute for Health and Welfare collected air samples and swabbed common surfaces, like handrails and service counters, at Finland's Helsinki-Vantaa airport during the peak of the 2015-2016 winter season.

After taking samples from spaces that included a children's play area, buttons at a pharmacy payment station, stair handrails and the passenger side of a passport help desk, the study authors found that rhinovirus — which is responsible for the common cold — was the most frequently detected virus on passenger-accessible airport surfaces. Plastic trays used at airport security checkpoints were the worst offenders of all, with evidence of at least one respiratory virus showing up in 50 percent of the team's swabs. What's more, 1 in 4 air samples showed evidence of adenoviruses, which can cause cold symptoms as well as more severe, flu-like symptoms.

All told, evidence of respiratory viruses was found on 10 percent of frequently touched airport surfaces in passenger environments, according to the findings, which were published Aug. 29 in the journal BMC Infectious Diseases. Remarkably, however, the team found no evidence of any of the aforementioned respiratory virus pathogens on surfaces they swabbed in one of the airport's bathrooms (supporting previous research that those spaces aren't nearly as scary as you might think).

The findings raise a question: Should you try to avoid touching everything when you're in an airport? Can you get sick from coming into contact with these pathogens? The answer, it turns out, is a bit complicated.

For one, the "pathogenicity" of a germ — in other words, its ability to cause disease —  must be weighed against the immune response of the person who comes into contact with it, said Philip Tierno, a professor of microbiology and pathology at the NYU Langone School of Medicine. Elderly individuals and other people with weakened immune systems, for example, have lower immune responses to germs, putting them at higher risk of getting sick. In addition, people can come into contact with pathogens either directly (by way of another person coughing, talking or sneezing) or indirectly (by way of a doorknob or luggage bin), meaning there are a myriad of ways people can become sick, particularly in spaces with a high volume of foot traffic like travel hubs.

Still, the number of people who pass through airports regularly make these places "an opportunity for illness," Tierno told Live Science.

However, there's very little data on the number of illnesses contracted at airports, Tierno noted, because people don't start experiencing symptoms the moment they come into contact with a pathogen. Instead, they enter an incubation period, which may last for several days.

So, what's the best way to avoid picking up a nasty bug the next time you fly? The study's authors recommended good, old-fashioned handwashing with soap and water. This is especially important because pat-downs at security checkpoints have been shown to potentially further expose fliers to infection. Additionally, Tierno said to ensure that any open wounds are properly safeguarded against potential exposure with appropriate dressings, and to wash your hands before and after eating and drinking. A face mask isn't a bad idea either, he added.