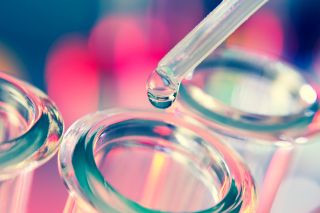 A new weapon in the battle against antibiotic resistance could be hiding in your stomach.

A new study suggests that short amino-acid chains found in human gastric juices can kill foodborne pathogens and stymie skin infections. These molecules, called peptides, may never make it through human trials — they've been studied only in mice so far — but the researchers hope that by digging into small molecules found in odd places, scientists can uncover new possibilities for drug treatments.

That's important, said study leader Cesar de la Fuente-Nunez, a postdoctoral researcher at the Massachusetts Institute of Technology, because bacteria are increasingly becoming resistant to the antibiotics typically used to treat infections. In 2013, the Centers for Disease Control and Prevention (CDC) reported that at least 2 million people in the U.S. are infected with antibiotic-resistant bacteria each year, and 23,000 die as a direct result. [6 Superbugs to Watch Out For]

"One of the advantages of these peptides is [that] because they target many different things at once, they make it very difficult for bacteria to become resistant," Fuente-Nunez told Live Science.

Fuente-Nunez and his colleagues discovered the new peptides using the biological equivalent of a search engine, poring over databases of human proteins to find particular amino acid sequences known to be common in anti-microbial peptides. (Amino acids are the building blocks of proteins. Peptides are chains of amino acids too short to qualify as full proteins.)

The researchers found that a subset of peptides, originating from an enzyme found in the human stomach called pepsin A, were particularly intriguing, the team reported Aug. 20 in the journal ACS Synthetic Biology. These peptides most likely help quash nascent bacterial infections when nasty pathogens enter the digestive tract, traveling with food and water, Fuente-Nunez said.

Topical treatments are likely the most promising route for turning peptides into pharmaceuticals, said Peter Belenky, a professor of microbiology and immunology at Brown University in Rhode Island who was not involved in the research. The immune system can easily recognize foreign peptides, so they're often attacked and cleared from the body before they can do any good.

"They're great as potential therapeutics," Belenky told Live Science, "but they're more suited to things like the experiment they did here, where it's a topical peptide."

To investigate the stomach peptides' potential as drugs, Fuente-Nunez and his team plan to study in more detail how these substances interact with the human body. The researchers are in talks to partner with drug-development companies to explore the peptides more thoroughly, he said.