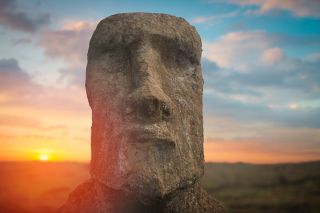 In popular science literature, much ink has been spilled on the supposed collapse of Easter Island, or Rapa Nui, as it's known in the local language.

Jared Diamond's 2005 book "Collapse," for example, presents a chilling version of what happened in the centuries after Polynesian seafarers colonized the remote Pacific island around A.D. 1200: Rivalry between clans drove the islanders to build hundreds of increasingly big "moai," the larger-than-life statues carved from stone. This fierce competition and population growth caused a hubristic over-exploitation of resources, driving the Rapanui people to desperation, and even cannibalism, and Europeans arriving in the 18th century encountered a society well on its way to decline, according to Diamond's account.

But archaeologists who have been studying the ancient quarries, stone tools and other resources on the island have recently been building a different picture of what happened before European contact. A study published today (Aug. 13) in the Journal of Pacific Archaeology adds a new piece of evidence to the case against Rapa Nui's collapse. [Image Gallery: Walking Easter Island Statues]

Rapa Nui is probably most famous today for its 1,000 moai, the towering statues that were placed on platforms ("ahu") and sometimes adorned with colossal hats or topknots called "pukao." The monuments —which weigh as much as 82 tons (74 metric tons) and are found all over the island's coastal areas —were amazingly built without the help of wheels or large animals.

Previous archaeological research has shown that no one clan had all the stone resources within its territory to make these massive monuments, and that there were preferred quarries for each type of stone. For example, the majority of moai came from a singletuff source, and most of the pukao came from a single red scoria quarry complex. In the new study, Dale Simpson, Jr., an adjunct professor of anthropology at the College of DuPage in Illinois, set out to investigate the origin of basalt stone tools that were used in the moai carving.

"Each quarry is like a finger and each stone you pull from it is going to have a fingerprint," Simpson told Live Science. Simpson and his colleagues sought to match the geochemical signatures in a set of 21 basalt picks and adzes (or "toki") with basalt quarries on the island. He said that he and his colleagues were "pretty amazed" to find out that the stones were mainly coming from one quarry complex, even though there are other sites to get basalt on the island.

"This continued pattern of minimum sources-maximum use suggests a form of collaboration," Simpson told Live Science. In other words, he thinks the clans had a system of exchange that allowed them to trespass on each other's territory to share resources. "I think that that goes against the collapse model that says all they were doing was competing to build bigger statues," he added. [7 Bizarre Ancient Cultures That History Forgot]

Study co-author Jo Anne Van Tilburg, a UCLA archaeologist who is also director of the Easter Island Statue Project, said the results support "a view of craft specialization based on information exchange, but we can't know at this stage if the interaction was collaborative." In a statement, Van Tilburg suggested that it's possible that the quarrying of the stone tools "may also have been coercive in some way," and that the study "encourages further mapping and stone sourcing."

Carl Lipo, a professor of anthropology at Binghamton University in New York, who was not involved in the study, said the results aren't really surprising. "The fact that there isn't 'control' of resources is pretty clear when one looks at other aspects of the record," Lipo said in an email to Live Science. "Yet, such findings are important because of the degree of misunderstandings and assumptions people have about the island."

"What archaeologists who conduct fieldwork on the island have learned in the past 20 years is that the evidence dramatically contradicts the tales that most people have heard," he said. Lipo explained that there is no archaeological evidence for the control of resources or any hierarchical distribution of resources, which is leading to a new narrative about the pre-contact Rapa Nui society: that the island was not dominated by massive chiefdoms, and rather, communities shared resources without any prehistoric warfare.

Simpson noted that there are still thousands of Rapanui people alive today. Other archaeological research has suggested that population levels on the island peaked around the time of first European contact, in 1722, and then went into sharp decline in the century that followed. In another study that he published earlier this year in the Journal of Archaeological Science: Reports, Simpson argued that the impacts of colonization, which included disease, violence and forced labor, "arguably played the largest catalysts for Rapanui cultural change."