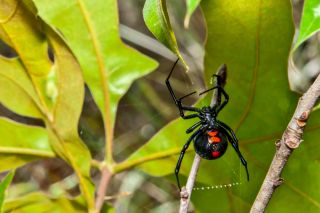 A black widow spider on a leaf. Black widows are expanding their range into Canada, likely as a result of climate change, a new study shows.
(Image: © Shutterstock)

Venomous black widow spiders now range farther north than scientists expected, into an area including the most-inhabited parts of Canada. And there's good reason to suggest that warming temperatures are driving the fatal biters north.

That's one conclusion of a new study, published online Wednesday (Aug. 8) in the journal PLOS One. The researchers in this study were trying to identify the geographical ranges of animals using citizen science and other spotty data sources. They focused on two spider species: the northern black widow (Latrodectus variolus) and the black purse-web spider (Sphodros niger). The scientists found that data taken between 1990 and 2016 showed a black widow range extending 58 miles (94 kilometers) farther north than the northernmost observation from the period between 1960 and 1989. They suggested that black widows might already range another 30 miles (50 km) north to the Montreal area, though none have yet been reported in that region. [Creepy, Crawly & Incredible: Photos of Spiders]

The team could not conclusively demonstrate that climate change has pushed the spiders north. But a number of their findings strongly suggest that's the case, the wrote:

Black widows are particularly able to move into new areas as the world warms, the researchers wrote in the study, because these spiders are "habitat and prey generalist[s]."

In other words, the dangerous critters can comfortably live in a whole range of sufficiently warm environments and eat whatever prey happens to already be there. Plus, the researchers noted, black widows tend to lay lots of eggs at once. So, once the first black widow arrives in a new spot, many more will likely soon appear.

Black widows might also be more capable of moving north, the researchers wrote, because unlike black purse-web spiders, they're perfectly happy nesting in human dwellings — which can allow them to ride out cold winters.

The researchers noted that even in areas where black widows are present, the odds of getting bitten by one are low. But a black widow bite is sufficiently dangerous, they wrote, that the threat is worth taking seriously.

For that reason, they called for a focused citizen-science project to track the creatures and document their potential northern migration. Black widows make particularly good candidates for data from citizen researchers, the study's authors wrote, because the bulbous, inky females with red spots on their bellies are so readily identifiable and unusual-looking.