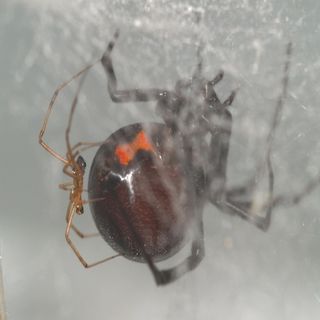 (ISNS) -- Scientists have discovered that male black widow spiders, famous for ending up as their mates' post-coital supper, are not as clueless as you might think. In a series of careful experiments, a team of researchers from Arizona State University West in Glendale has teased out evidence that black widow males do their best to avoid getting eaten by choosing mates who have recently fed.

The work also details something else very rare in the animal kingdom: a sexual power struggle in which males have the upper hand.

"Most of the time people focus on females" when it comes to the power of selecting mates, said spider researcher Eileen Hebets at the University of Nebraska in Lincoln. That power is critical to adaptation and evolution, and ultimately shapes the species. "It's much less common to think of males as a potential source of selection," she said.

It's only in extreme situations -- where mating brings the risk of death, for example -- that male selection appears and can be studied.

In the case of the North American black widow, Latrodectus hesperus, the Arizona experiments reveal that male black widows can detect telltale chemical signals on the webs of females. They can smell which females are well-fed and which are hungry, which leads to a simple choice: Which one is less likely to eat them? This ability to sense well-fed females also has another advantage: by choosing plump females, males are also choosing mates that are likely to produce large numbers of eggs.

"It's a double whammy," said Chad Johnson, the lead investigator on the study, which was published in the August issue of the journal Animal Behaviour .

In most animal species, females dictate the course of reproduction, said Johnson. They work hard to produce and safeguard a few eggs, while males generate lots of sperm at little personal cost. That difference in "investment" usually leads males to be promiscuous while females are choosy. But in species like the black widow, the danger of mating is so great for the males that they have to be the choosy ones.

To check this idea, the Arizona team put their laboratory-raised black widows through four experiments. First, they tested whether males were more likely to engage in courting behavior on the webs of well-fed females more than on the webs of hungry females -- even in the absence of the females themselves. The lab spiders did exactly that.

In their second experiment, the researchers put the females back into the mix. Again, the males greatly preferred the plump females.

Finally, the researchers rolled up onto sticks webs from females that were either well-fed or starving and presented them to males to find out if it was a chemical or structural difference in the web that was cluing in the males. Once again, the males preferred the webs of well-fed females, supporting the idea that the clue is some unknown chemical in the webs that the males can smell.

"He's not at all complicit in his own demise," said Johnson of the black widow males. "He's making the best of a bad situation."

Despite their efforts, though, male black widows frequently don't survive mating. Although the rates of survival were not the focus of this study, in some other widow species the risk of getting eaten is much greater.

"There is almost a continuum with spiders of varying degrees of risk," said Hebets. This is exactly what makes them so fascinating to study, she added.

There are even some species where males can get eaten before mating. "That’s obviously an even more extreme freak show," said Johnson.