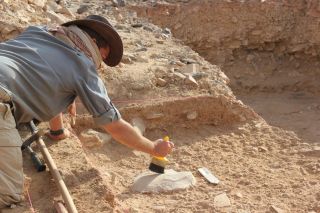 It turns out laziness existed long before couches and takeout. The "why bother?" attitude not only existed hundreds of thousands of years ago, but may also have led to the decline of an ancient human ancestor.

Homo erectus first appeared 2 million years ago and went extinct some 50,000 to 100,000 years ago. But compared with other hominins, like Neanderthals, this species may have been quite lazy and more reluctant to adapt to a changing environment, according to new study published July 27 in the Journal PLOS One.

Archaeologists from Australian National University analyzed thousands of newfound and previously unearthed artifacts from an excavation site in the Arabian Peninsula in modern-day Saffaqah, Saudi Arabia, in 2014. Their findings suggested that the Homo erectus species in that area exerted the minimal effort necessary to make tools and find supplies. [Top 10 Mysteries of the First Humans]

Instead, these early humans lived in places that had easy access to stones and water, the study found.

"To make their stone tools, they would use whatever rocks they could find lying around their camp, which were mostly of comparatively low quality to what later stone-tool makers used," lead author Ceri Shipton, an archaeologist at Australian National University, said in a statement. Such tools included cores, flakes, hand axes and cleavers.

A little way away from the Homo erectus camps was a rocky outcrop that had higher-quality rock but required a trek up a hill. "But rather than walk up the hill, they would just use whatever bits had rolled down and were lying at the bottom," Shipton said.

When the researchers examined the rocky outcrop, they found that it was untouched by Homo erectus — no traces of activity, no artifacts and no quarrying of the stone, Shipton said in the statement. By contrast Neanderthals and early Homo sapiens climbed mountains for high-quality stones and transported them over long distances, according to the statement.

These early humans were strong and skillful, and they thrived in the region for some time. But once the riverbeds dried out, as sediment samples from the area reveal happened, these people's lack of initiative doomed them.

"Not only were they lazy, but they were also very conservative," Shipton said. Their tools stayed the same in both size and composition as the environment around them changed.

"There was no progression at all, and their tools are never very far from these now-dry river beds," Shipton said. "I think, in the end, the environment just got too dry for them."