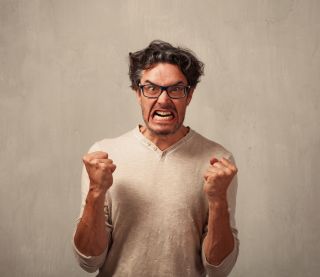 Grouchy people are inclined to overestimate their smartness.
(Image: © Shutterstock)

If you know someone who's generally ill-tempered, it might please you to know that they're probably not as smart as they think they are. That's because, unlike other negative emotions, anger seems to make people overconfident about their intelligence, a new study suggests.

"Anger differs significantly from other negative emotions, such as sadness, anxiety or depression," Marcin Zajenkowski, study author and psychologist at the University of Warsaw in Poland, told PsyPost.

Previous research has shown that anger is an unusual negative emotion in that it's often associated with positive traits, like optimism. But how anger affects perceived intelligence was unclear. Zajenkowski and his colleague suspected that angry people might be more likely to overestimate how smart they are. [9 DIY Ways to Improve Your Mental Health]

To test this, the researchers surveyed more than 520 undergraduate students attending schools in Warsaw. The students answered survey questions to gauge how easily and how often they get angry. Then, the students took a survey to assess their own intelligence before taking an objective intelligence test.

In general, the students with a higher tendency to get angry also overestimated their cognitive abilities, the study found. On the other hand, the students who were more neurotic, a trait that's often associated with anger, generally underestimated their intelligence. Neuroticism refers to negative traits including irrational anxiety and overwhelming distress.

Perhaps not surprisingly, the researchers found that narcissism was a key factor in how people judged how smart they were. The more ill-tempered personalities were associated with "narcissistic illusions," Zajenkowski told PsyPost.

It's important to note that while the study found that angry people tend to be more narcissistic and overestimate their brilliance, anger was unrelated to actual intelligence level. And, although the researchers found an association between the two traits, it's unclear if there's a cause and effect relationship between anger and overestimating intelligence. More research is needed to explore that link.

What the study didn't test was how anger affects perceived intelligence in the heat of the moment. The study assessed anger as a personality trait, but anger is often a temporary emotion. Additional research is needed to find out if people who don't anger easily might be overly confident in their abilities only in the moment that they're upset.

The study was published online on July 21 in the journal Intelligence.