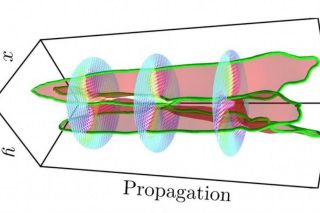 A figure from the study shows light waves interacting with one another around singularities.
(Image: © University of Bristol)

A team of physicists has tied light into figure-8 and torus knots.

The researchers, according to a paper published July 30 in the journal Nature Physics, figured out how to make the waves of two laser beams of light interfere with one another, and ultimately loop around each other in ways you might be more likely to associate with shoelaces or the knots on a sailboat.

But knots don't have to be made of string, the researchers explained in an accompanying statement. Instead, a knot is a mathematical term for any shape in space that loops around itself in particular ways. And by exploiting the complex shapes light waves form as they vibrate in two directions (up and down, and side to side) along their paths, and the ways those waves interact with one another, they were able to cause electromagnetic light fields to knot in the air. [The 11 Most Beautiful Mathematical Equations]

The knots in question, the researchers wrote in their paper, were visible enough in images of the light wave data for them to identify the figure eights and toruses. They also confirmed their findings using formal knot theory mathematics.

To create the knots, the researchers carefully tuned the up-and-down and side-to-side wave motion (the polarization) of two beams of light, partly using technology not unlike that found in polarized sunglasses. The knots formed around "polarization singularities" where the beams intersected, places where the side-to-side and up-and-down wavelengths were exactly equal, and a number of other wavelengths of light looped around them. At those points, light bent in the way the researchers wanted.

"We are all familiar with tying knots in tangible substances such as shoelaces or ribbon," Mark Dennis, a University of Bristol physicist and author on the paper, said in the statement. "With light, however, things get a little more complex. It isn't just a single thread-like beam being knotted, but the whole of the space or 'field' in which it moves."

Dennis and his co-authors were interested in the topology, or the complex mathematical shaping, of that space. They found that the light formed more gaps when it knotted than expected, leaving spaces without significant energy from the beams.

Down the road, the researchers said, they hope to develop even more complex light knots; they hope this technology will speed the development of more precisely-tuned light sources. But right now, for researchers, the most interesting part of the story is still studying the topology of these strange singularities.