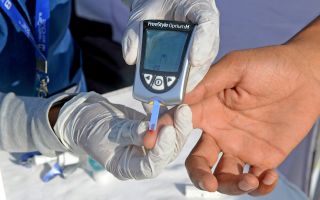 A nurse uses a glucometer to collect a blood sample at a free diabetes check-up camp on World Health Day in Hyderabad, India in 2016.
(Image: © Noah Seelam/AFP/Getty)

People with diabetes appear to have a higher risk of developing cancer than those without diabetes, and the risk is greater in women than men, a new meta-analysis finds.

In the study, published today (July 19) in the journal Diabetologia, the researchers sifted through earlier studies that reported a link between cancer and diabetes. After removing studies that looked at only a single gender and studies that hadn't adjusted for age, the researchers ended up analyzing data from more than 19 million individuals with either type 1 or type 2 diabetes across more than 100 studies and data sets. [10 Do's and Don'ts to Reduce Your Risk of Cancer]

"Given the epidemic of both diabetes and cancer, it is important that both women with and without diabetes, as well as health care providers, are aware [of] the heightened risk of cancer following diabetes in women than men and try to prevent the onset and manage the progression of diabetes," said lead author Toshiaki Ohkuma, a research fellow in the renal and metabolic division at the George Institute for Global Health in Australia.

It remains unclear why women with diabetes would, for most cancers, have a higher risk than men with diabetes do, but the researchers had some hypotheses. For example, having higher blood-glucose levels can damage DNA, which could, in turn, lead to cancer, Ohkuma said.

"Women often spend longer duration than men in the prediabetic stage [of the disease], where glucose levels are high," Ohkuma told Live Science in an email. (Prediabetes means that a person's blood sugar levels are higher than normal but not high enough to be classified as type 2 diabetes, according to the Mayo Clinic; people with prediabetes often go on to develop type 2 diabetes.) And after diagnosis of diabetes, "women are often undertreated or not getting the same level of treatment as men," Ohkuma said.  What's more, a 2015 study showed that women were less likely than men to take the medication needed to lower blood glucose levels.

However, when looking at specific cases, the researchers noted that there isn't much data on sex differences in specific types of cancers, so the reasons why men or women might have a higher or lower risk of developing these illnesses remains unclear.

Ohkuma said that "women with diabetes should try to achieve better [blood sugar] control through lifestyle modifications and medications by consulting health practitioners." What's more, women with diabetes "should also participate in any available cancer-screening checkups to detect cancer earlier," he added.

One limitation to the study is that the researchers did not adjust for other factors that could be associated with diabetes and cancer in women, such as pregnancy, menopause and hormone-replacement therapy, the researchers wrote.