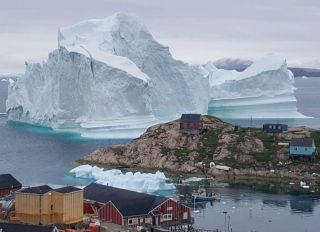 An iceberg just grounded outside the village of Innarsuit in northwestern Greenland, shown here on July 13, 2018.
(Image: © Karl Petersen/AFP/Getty Images)

Residents of a small town on Greenland's western coast were evacuated after a giant iceberg parked itself nearby, bringing a threat of a tsunami and flooding that could wash much of the village away.

The iceberg, which was first sighted on July 12, is now settled to the north of the town of Innaarsuit, The New York Times reported. It measures a staggering 656 feet (200 meters) wide and rises about 328 feet (100 m) above sea level, according to satellite data, and is thought to weigh more than 12 million tons (11 million metric tons), according to the Times.

In photos, the enormous berg dominates the horizon near Inaarsuit, which is home to 169 people. The iceberg is an impressive sight, but it also brings significant risk to the village; should the berg disintegrate, massive chunks of ice falling into the bay could send powerful waves washing over the town. On Friday (July 13), 33 people in Innaarsuit who lived closest to the water were evacuated and fishing boats were moved inland, local news outlet Sermitsiaq reported. Meanwhile, residents are waiting to see if the berg will break up or if rising tides and winds will push it to a safe distance in Baffin Bay. [Images: Greenland's Gorgeous Glaciers]

By the morning of July 14, the iceberg had drifted about 1,969 feet (600 m) farther north, and local officials were monitoring it to assess the danger to residents and to decide whether further evacuations would be necessary, Police Chief Aqqaluk Petersen told Sermitsiaq.

Video footage shared by Greenland's KNR News on YouTube highlights the scale of the towering iceberg; fuel tanks and a power station visible near the coast are especially vulnerable to flooding should the iceberg break apart, Sermitsiaq reported.

Meanwhile, a satellite view tweeted on July 14 by Antti Lipponen, a research scientist at the Finnish Meteorological Institute, demonstrates the size of the berg (along with another, smaller iceberg slightly to the north), as well as its proximity to the Greenland coastline.

Iceberg visits are not new to Innaarsuit, but this is the largest one the village has seen in some time, according to village council member Susanne K. Eliassen, Australia's Special Broadcasting Service reported.

"There are cracks and holes that make us fear it can calve anytime," Eliassen said.

Recently, a glacier in eastern Greenland cracked and calved an iceberg that measured 4 miles (6 kilometers) long — and scientists were there to capture the event on video, documenting the birth of a berg that was about half the length of Manhattan, Live Science previously reported.

The fate of the Innaarsuit iceberg — and the town — depends on local weather, as warm rainfall could cause the berg to break up and trigger destructive flooding, according to The Sydney Morning Herald.