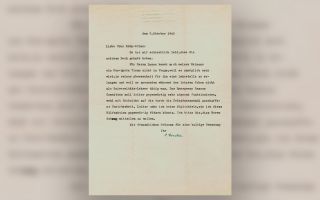 In a letter written by Albert Einstein in 1940, the scientist apologized for not being able to help a European scholar obtain a visa.
(Image: © Courtesy of Cohasco Inc.)

In a 1940 letter, Albert Einstein regretfully addressed the plight of a European scholar hoping to emigrate to America, whom Einstein was unable to help. That letter is currently up for auction in the U.S.

In the letter, Einstein wrote in German that he was "terribly sorry" about the European academic's misfortune, explaining that the scholar was nonetheless ineligible for a non-quota immigration visa, according to an English translation of the letter shared online by the document preservation center Cohasco Inc., in Yonkers, New York.

Cohasco is auctioning the famous physicist's missive, along with many other historic documents, photographs, maps and artifacts, some of which date to the 18th century. [Einstein Quiz: Test Your Knowledge of the Famous Genius]

Other items offered for auction in the catalog include the earliest version of the first draft of the Bill of Rights, dated to June 13, 1789; two playing cards dated to the Revolutionary War era; a stovepipe hat of "old New York," circa 1856 to 1870; and a document dated July 4, 1776, that is the earliest record in the U.S. with the name of an African-American — Cuffee Dole, who served in the Revolutionary War, according to the auction catalog.

Though Einstein couldn't assist the visa applicant in the 1940 letter, his efforts helped thousands of European Jews fleeing the Nazis during World War II. In 1934, Einstein founded the International Rescue Association (IRA), a subset of which — the Emergency Rescue Committee (ERC), formed in 1940 — was instrumental in rescuing more than 1,500 refugees from Nazi-occupied France, Cohasco representatives reported in the catalog.

But at the time of the 1940 letter requesting Einstein's aid, the ERC was "functioning only rather sluggishly at the moment," Einstein wrote.

Other letters written by Einstein have appeared at auctions in recent years, including letters detailing his ideas about general relativity, one of this most well-known theories; his "secret formula" for happiness; musings that questioned God's existence; and a harsh criticism of the British government's appeasement of the Nazis, before the start of  World War II.

But perhaps Einstein's most notable historic letter is the one he wrote on Aug. 2, 1939, to President Franklin D. Roosevelt; the letter is thought to be one of the deciding factors that launched America's entry into the Atomic Age, The New York Times reported in 1964.

In the letter, Einstein called the president's attention to the recent splitting of the atom, bringing scientists the potential to not only tap into vast reservoirs of energy but also to create unimaginably devastating weapons. Though Einstein was a pacifist, he urged Roosevelt to take steps to accelerate atomic research in the U.S., even though that would surely include developing powerful bombs, according to The New York Times. His influence is credited with kickstarting America's nascent atomic research; developing nuclear weapons was a deciding factor in securing victory for the Allied forces during World War II, the Times reported.

However, not all of Einstein's personal writing was commendable. A recent translation of his travel diaries from 1922 and 1923 revealed a perspective on people from parts of Asia that was explicitly racist.

The auction is accepting bids on Einstein's letter and other items until July 24, at 9 p.m. ET, according to the organization's website.