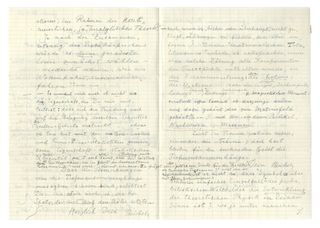 Two letters written by Albert Einstein detailing his thoughts on some of the most famous theories in physics are going up for auction this week, according to Nate D. Sanders Auctions, which is auctioning off the letters.

Einstein wrote the two letters to his friend and scientific sounding board Michele Besso. One letter outlines Einstein's early thoughts on a grand unified theory, while the other, written much later, is a bit more philosophical, asking what can be known and whether some physical theories can ever be proved.

The bidding for each letter starts at $60,000. Sam Heller, a spokesman for the auction house, said the letters came from a private collection, whose owner didn't want to be identified. [8 Ways You Can See Einstein's Theory of Relativity in Real Life]

In one of the letters, written by Einstein in Gatow, a district of Berlin, Germany, on Sept. 5, 1929, he detailed his thoughts on the so-called grand unified theory in physics. At the time, Einstein was in Gatow attempting to escape the rush of publicity — the press and thousands of well-wishers — surrounding his 50th birthday; he was staying with a friend and physician named Janos Plesch, according to Albrecht Fölsing's biography of Einstein.

At that point in his life, Einstein was working on unifying gravity and electromagnetism, as he felt that both were underlying manifestations of a deeper theory. He didn't succeed — physicists still haven't managed to do it — but the letter illustrates the directions he thought might be fruitful for solving the theory. Notably, he dispensed with parts of quantum mechanics, which describes the behavior of particles in a probabilistic way, as illustrated in one part of the letter:

"However, the very best thing, on which I have worked for days and half the nights, speculating and making calculations, is now completed and lying in front of me, compressed into seven pages with the title 'Unified Field Theory.' It looks antiquated, and the dear colleagues, including you, my dear, will initially stick their tongues out as far as possible. After all, these equations do not contain Planck's constant h." [Einstein Quiz: Test Your Knowledge of the Famous Genius]

Planck's constant, which determines the relationship between energy and wavelength, appears in most quantum mechanical theories, and in the late 1920s, Einstein wasn't as enamored of the theory as many of his physicist colleagues were; he felt that the statistical nature of quantum mechanics was a problem for the theory. In other words, in many quantum mechanical applications, you can find a probability that a particle will be in a given place, for example, but you can't say for sure exactly where it is. Einstein thought that meant the theory was incomplete.

Einstein says as much in the letter: "But once they have clearly reached the performance limit of the statistics craze, people will remorsefully return to the time-space concept, and then these equations will constitute a point of departure." Basically, he thought that his work might be a first step in finding a unified theory not based on probabilistic calculations, the way quantum mechanics is, but rather something more akin to classical theories like mechanics, where, for example, the location of an object can be specified exactly.

Einstein claimed to have found a way to include a "distant parallelism" when describing space-time. Distant parallelism, which states that parallel lines never meet, is a basic premise of the Euclidean geometry most people learn in school. But Euclidean geometry doesn't always occur in geometries used in some general relativistic calculations. That particular methodology ended up not producing a unified theory.

The second letter was written much later, on April 15, 1950. By that time, Einstein was in Princeton at the Institute for Advanced Study, where he would remain until his death in 1955. This letter also talks about general relativity. One sentence seems to speak of a relationship to God: "There is one thing that I have learned in the course of a long life: It is devilishly difficult to get closer to 'Him', if one does not want to remain on the surface."

But to say Einstein was speaking of God would be a misreading, said Galina Weinstein, a historian of science who authored "Einstein's Path to the Special Theory of Relativity" (Cambridge Scholars Publishing, 2017). Weinstein said the "Him" reference has little to do with religion.

"Einstein does not talk about what connections with God he had (or didn't have). He only talks about unified field theory," she told Live Science in an email. The rest of the paragraph bears this out; the discussion is about his mathematical technique for coming up with something like a unified theory that could reconcile gravity with both electromagnetism and quantum mechanics. (That, too, proved to be a dead end.)

The Nate Sanders auction house has sold other Einstein memorabilia, Heller said. In August, the firm sold a 1938 letter from Einstein to Besso lamenting the agreement British Prime Minister Neville Chamberlain signed with Germany for $31,250, and an autographed copy of a famous photo of Einstein sticking out his tongue sold for $125,000 in July.

The auction will continue until Thursday (Sept. 28) at 8 p.m. EDT for the letter about a unified theory and the one that mentions God.