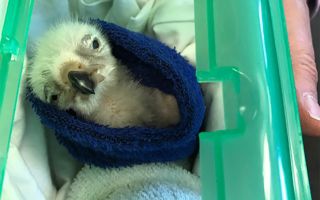 Authorities at Heathrow Airport seized this precious baby vulture and more than a dozen raptor eggs from a man carrying them in a body belt.
(Image: © Border Force)

It's unusual for airport security to need to pull aside a traveler for carrying eggs in their waistband, but that's exactly what happened at Heathrow Airport in London, the HuffPost reported. It turns out the eggs weren't tucked away so they could later become smelly airplane snacks. These eggs held very alive baby South African birds of prey inside them.

Border officials seized the 19 eggs that were packed into a body belt worn by a 56-year-old Irish man traveling from South Africa, the HuffPost reported. Two of the eggs were newly hatched, revealing fuzzy white vulture chicks — not exactly the exotic bird one might associate with the illegal animal trade. And they're adorable, to boot.

The United Kingdom's Home Office — the government agency responsible for immigration and security — identified the remaining eggs as those of other South African raptor species such as eagles, hawks and kites. [In Photos: Birds of Prey]

Vultures and birds of prey don't make good souvenirs or pets and are illegal to have because they are internationally protected under the Convention on International Trade in Endangered Species (CITES) agreement.

The main reason for illegal trade of these birds is financial gain, according to Raptor Aid, an English charity dedicated to protecting birds of prey. The birds are sold in pet markets in Thailand and places in the Middle East, Raptor Aid said on its website. Overall, the illegal wildlife trade is a more than $6 billion industry.

The Irish smuggler was arrested, and the case is under investigation by the National Crime Agency, the HuffPost reported. The birds from all 19 eggs now face a better future and are in the hands of specialists, the Home Office told the HuffPost.