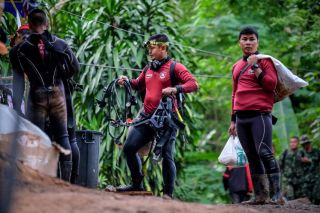 Thai marine police walk out of Tham Luang caves on July 3, 2018, wearing their scuba gear as they continue the rescue operation of 12 boys and their soccer coach who have been stranded for over a week after monsoon rains blocked the main entrance in Chiang Rai, Thailand.
(Image: © Linh Pham/Getty Images)

Twelve boys who were stranded in a cave in Thailand when it suddenly flooded are now beginning the harrowing process of trying to make their way out, despite not being able to swim or scuba dive.

The boys, who are part of a soccer team, were visiting the narrow, winding Tham Luang caves in Chiang Rai province when a flash flood marooned the boys deep in the labyrinthine cave system on June 23. They were found on Monday (July 2), and though authorities are still attempting to pump water out of the caves, it now seems clear that the boys will have to dive out, or risk spending months there until the waters subside naturally, CNN reported. Monsoon rain is predicted there Saturday (July 7), The Guardian reported, so the rescue operation is racing against time.

But how can people who don't know how to swim or scuba dive navigate their way out of a pitch-black, 1.5-mile-long (2.5 kilometers) cave system filled with strong, rushing waters?

The key is that the boys probably need only "quick and dirty" training in the very basics of scuba diving, while relying on the help of experienced cave divers for most of the challenges, said Richard Black, a cave diver and instructor with Florida Dive Connection, a board member on the ADM Exploration Foundation in Florida, and a team diver with Karst Underwater Research. [The 7 Longest Caves in the World]

Cave diving is one of the more dangerous and technical forms of scuba diving, with 368 fatalities reported between 1969 and 2007, according to the Cave Divers Association of Australia. With normal scuba diving, "if something goes wrong you can go directly to the surface," Black told Live Science. "In cave diving, that's not the case. You're in a tunnel that's filled with water. You have to continue or go back to where you started." Many cave divers have died when they ran out of oxygen or got lost or trapped in narrow cave systems; even finding their bodies can be a risky challenge.

In addition to the narrow, water-filled passages, caves are like dark labyrinths, so finding one's way out can be tricky. [Explore the Underworld: The 10 Coolest Spelunking Trips]

"When you're in a cave, you experience darkness like you've never experienced before. It is total darkness, it is the absence of light," Black said. In addition, the Tham Luang caves were recently flooded, so the water is very turbid and filled with silt, Black added. That means that even with strong lights, "visibility now is reduced essentially to zero."

Though cave diver George Veni can't give specifics on the Thai cave in particular, he told Live Science risks abound in these types of caves. "Diving long distances through low-to-no visibility conditions, against a harsh current, and that some sections are apparently narrow and can't be easily passed with diving gear, and that constrictions increase velocity and sticking your body in there kicks up the velocity even more to make it even harder to push through, and that if you get into trouble you can’t simply go up to the surface for air, all adds to major risk," said Veni, who is the executive director of the National Cave and Karst Research Institute and president of the International Union of Speleology.

Normally, cave divers use a guide line, usually just a thin string, from the entrance to the cave, which they hold to navigate back out of the cave. In this situation, a thick, heavy rope may be needed so that the boys, who are complete novices, have something very obvious and sturdy to cling to in the rushing waters, he said.

The other issue is the temperature. While Thailand does have warmer temperatures than some places where cave divers explore, the boys will still be under the water.

"You lose heat underwater, 25 times faster than in air. So, the kids are going to have to have wet suits brought in for them to keep them warm on the way out," Black said.

If Black were implementing the rescue, his first step would likely be anchoring a thick, heavy rope in place from the entryway to the flooded caves all the way to the boys, he said. Based on news reports, anchor rope is already being placed, and videos have already shown scuba gear being ferried into the cave, Black added.

The next step would be to ensure the team brings in scuba gear with enough oxygen to make it out of the long cave system — in this case, a rebreather, in which a diver's exhaled air is recirculated with additional oxygen, might be the best bet, Black said.

From there, perhaps three or four experienced scuba divers could give the boys a quick crash course in diving. This could be as short as 15 to 20 minutes or as long as an hour, depending on how comfortable the boys are. The key is teaching them not to panic.

"They don't need all the skills, they just need to get comfortable breathing underwater," Black said.

One thing working in their favor is that these are young boys who may not feel the same level of fear as older people might, he said.

"These are 13-year-old kids, they don't understand their own mortality, they think they're invincible," Black said. "That’s going to work in their favor."

The basic training would involve learning to breathe underwater through scuba gear and learning to clear the scuba mask of water if water seeps in.

From there, Black imagines that the authorities may send in a team of divers — possibly two divers per kid, so 26 divers total, who would help escort the boys back. The boys could cling to the back of one diver, while another diver in the back helps support them as well. In that way, the teenagers will only need to hold onto the rope and the diver and breathe through the mask, while the experienced cave divers swim them out, he said. The caves are probably not flooded all the way through, so the divers will probably come up for short periods during the process. There aren't lots of experienced cave divers in the world, so the Thai government has likely reached out to an international community of divers, Black said.

During the entire process, the divers will need to be aware of the water levels. The water current is still likely strong and conditions could turn on a dime.

"You also have to remember that rain created this problem and a sudden new rainstorm could make things worse," Black said.

The whole process could take a day or two, but given that the boys have lasted this long, their odds are good, Black said.

"They've survived this long, so they're survival instinct is great," Black said.