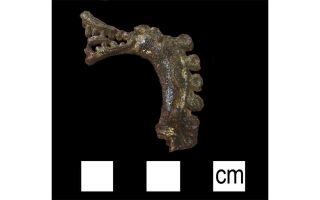 Archaeologists discovered a Viking dragonhead pin made out of lead in Birka, a Viking archeological town in Sweden, in 2015.
(Image: © Photograph by Lena Holmquist; Antiquity 2018)

More than 130 years ago, a Swedish farmer discovered a black dragon — or, that is, a Viking carving of one that had a pointy horn on its head and a curled mane down its neck. The soft soapstone carving looked like a mold for casting metals, but the farmer never found any of the little dragons spawned by the mold.

But where the farmer flopped, modern scientists triumphed. In 2015, a team of archaeologists in Birka, a Viking archaeological hotspot in Sweden, discovered a Viking-made metal dragon that looks almost exactly like the mold, according to a new study published online today (June 28) in the journal Antiquity.

"Of course, as an archaeologist excavating in Birka, one is aware that you definitely will make thousands of fine finds. This find, however, once identified, blew our minds!" said study senior researcher Sven Kalmring, an archaeologist at the Centre for Baltic and Scandinavian Archaeology in Schleswig, Germany, and a guest researcher in the Department of Archaeology and Classical Studies at Stockholm University. [See Photos of the Newly Discovered Dragon Pin]

The dragonhead is tiny — just about 1.7 by 1.6 inches (4.5 by 4.2 centimeters), or smaller than a deck of cards. But it's very detailed; its gaping mouth has pointy teeth and a tongue that almost sticks out of its snout.

This lead dragon wasn't a child's toy. Rather, it served as an ornamental head to an iron dress pin, Kalmring said. The Vikings likely chose lead because it has a low melting point and it's close in color to silver, he noted.

"Other examples of dragonhead dress pins, mostly in bronze, are known from the major centers of the Viking world, for example, from the Viking town of Hedeby in present-day northern Germany," Kalmring told Live Science. Moreover, many dragonhead dress pins have counterparts in Viking ship figureheads, called "drekar" — Old Norse for "dragon ship."

Regarding the newfound Birka dragonhead, it appears that the figurehead of the Viking Ladby ship, which dates to about A.D. 900 and was discovered in Denmark, is the closest in style. Meanwhile, the 0.4 ounces (13.5 grams) dragon pin dates to the second half of the ninth century, or A.D 850 to 900, the researchers said.

Since the pin appears to predate the boat, it's possible that the Ladby's figurehead was modeled after the Birka mold, said Kalmring and study co-researcher Lena Holmquist, an archaeologist in the Department of Archaeology and Classical Studies at Stockholm University.

Subtle differences indicate that the mold found by the Swedish farmer in 1887 isn't an exact match with the newfound pin, but the discovery of both indicates that the Vikings produced their fair share of molds and pins. However, given that these pins are rare, it's likely that they were reserved for high-status individuals, the researchers said.

But more work is needed to say so for sure. None of these dragon pins has ever been found in a Viking grave, Kalmring said, which would have marked their importance.

Even so, the finding does make one thing clear. "It confirms Birka's prime position among the major Viking-age sites in the trading network around the Baltic," Kalmring said.