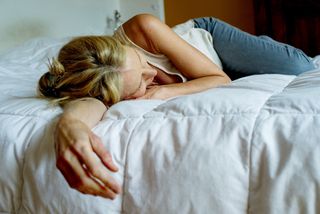 The recent deaths of Anthony Bourdain and Kate Spade have raised the question: Why is suicide becoming more common? And what can be done to reverse the trends?

While researchers have proposed everything from social isolation to bullying as the reason, it's still a mystery why rates are rising. Experts do, however, recommend approaches that could help reduce the rates. [The Top 10 Leading Causes of Death]

What's behind the rise?

A report, released by the Centers for Disease Control and Prevention (CDC) on Thursday (June 7), showed that rates of death by suicide in the United States have risen by roughly 25 percent in the last couple decades.

Though the reasons for that increase are not completely clear, in past research, experts have pointed to an increased sense of isolation among Americans, as well economic factors and a rise in mental illness.

Other pointed to the rise of technology, which has replaced important face-to-face interactions (though some argue technology actually decreases loneliness.

But in the end, all of these explanations are speculative.

It's very hard to make broad statements about suicide, said Dr. Katalin Szanto, a professor of psychiatry at the University of Pittsburgh, who has published widely on suicide prevention. For instance, it is now the second leading cause of death for people ages 15 to 24 in the U.S., and yet many researchers think aging Baby Boomers will be especially vulnerable to suicide in the coming years, Szanto said.

And previous CDC reports indicated that suicide in the U.S. is often connected to other forms of violence, such as bullying, sexual violence or child abuse, according to the most recent study. Yet rates of those forms of violence have not increased, and in possibly dropped, in the past two decades.

Likewise, it's clear that if people can find help the first time that they consider suicide, they are more likely to recover and never make another attempt. And yet, people who have made an attempt once are much more likely to try again, Szanto said.

Stopping individual suicides is possible. For instance, in a 10-year study at the Henry Ford Hospital in Detroit, doctors and therapists employed several interventions that led to an 80-percent drop in suicide rates, Live Science previously reported. (One such method involved asking depressed patients how they envisioned dying. Doctors then created systematic roadblocks to enacting that vision — by, for instance, asking patients to remove firearms from their houses and then following up to see if they actually did so).

However, knowing what drives suicide and having improved treatment options won't help if people don't reach out for help when they are at the their most hopeless, said Susan Lindau, a practicing therapist and adjunct professor at the University of Southern California who specializes in suicide.

One finding in the new CDC report is that more than half of the deaths happened among people who had not been diagnosed with mental illness. Men may be especially affected by this problem, Szanto said.

"We have this big problem, especially among men, that they have undiagnosed and obviously untreated mental health conditions," Szanto told Live Science. "Often the manifestation of depression is different in men than in women. We tend to be a little bit better in our clinical assessments to diagnose 'typical' depression in women."

She said that women tend to be better at seeking help in the first place as well. And for the men who do seek help, the indicators are ill-defined, like propensity to violence or substance abuse, Szanto said.

Lindau said that people still won't seek help if they perceive a stigma around depression and mental illness as a whole.

"It is very brave to be able to say, 'I feel horrible and I need to reach out.' Because you are revealing your vulnerabilities. Our culture does not really respect vulnerability," Lindau said.

She added that people need to understand that depression and other mental illness are chronic diseases, just like diabetes or multiple sclerosis.

Lindau said she expects recent high-profile suicides to affect her private practice over the next few days, because patients will be thinking about it and, in worst-case scenarios, perhaps tempted to follow suit.

"It's going to be pretty awful for them. But I confront it head on. I'm not going to be coy about it," she said. "I'm not pretending it didn't happen."

For many people in crisis, she said, the most important thing is to just get through a 20-minute window when they are the most tempted to end their lives. If they can reach out to family or friends and get through that moment, the pain won't disappear, but they have much better odds of coming through the other side and moving toward treatment and recovery, Lindau said.