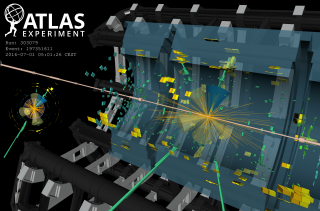 CERN shared this visualization of one of the events in the new Higgs dataset.
(Image: © ATLAS Collaboration/CERN)

Today is a good day for physics.

Two new results released today (June 4) have found the Higgs boson popping up along with the heaviest particle ever discovered. And the results could help us better understand one of the most fundamental problems in physics ­— why matter has mass.

The findings were released at the Large Hadron Collider Physics 2018 conference in Bologna, Italy. The discovery was independently accomplished by two experiments (A Toroidal LHC Apparatus, or ATLAS, and Compact Muon Solenoid, or CMS) using data recorded at the Large Hadron Collider (LHC), located at the CERN laboratory in Switzerland. These results are available to the public in two papers, one just submitted for publication, and one just published.

The hunt for the Higgs and the origins of mass have a fascinating history. In 1964, several groups of scientists, including British physicist Peter Higgs and Belgian physicist Francois Englert, predicted that the mass of fundamental subatomic particles arose through interactions with an energy field now called the Higgs field. The energy field permeates the universe. Particles that interact more with the field are more massive, while others interact little with the field, and some not at all. A consequence of this prediction is that a subatomic particle called the Higgs boson should exist. [6 Implications of Finding the Higgs Boson]

After nearly 50 years of searching, researchers at the LHC found the Higgs boson in 2012. For their successful prediction, Higgs and Englert shared the 2013 Nobel Prize in physics.

The heaviest known fundamental subatomic particle is the top quark, discovered in 1995 at Fermilab, located just west of Chicago. There are six known quarks. Two are stable and found at the center of protons and neutrons. The other four are unstable, and are created only in large particle accelerators. A single top quark has a mass comparable to an atom of tungsten.

In today’s announcement, scientists described a class of collisions in which a top quark matter/antimatter pair was created simultaneously with a Higgs boson. These collisions allow scientists to directly measure the interaction strength between Higgs bosons and top quarks. Because the interaction of a particle with the Higgs field is what gives a particle its mass, and because the top quark is the most massive fundamental subatomic particle, the Higgs boson interacts most strongly with the top quark. Accordingly, interactions of this sort are an ideal laboratory in which to do detailed studies of the origins of mass.

This measurement was particularly challenging. The discovery of the Higgs boson in 2012 involved just a handful of collisions. Collisions in which both Higgs bosons and top quarks are simultaneously produced happen only in 1 percent of collisions in which a Higgs boson is produced. When one includes the great variety of ways in which top quarks can decay, this analysis required dozens of independent analyses, involving hundreds of researchers. The analyses were then combined into a single measurement. This was a very difficult accomplishment.

It's also a very rare type of interaction. Scientists sifted through around a quadrillion (10 raised to the 15 power) collisions between pairs of protons to identify a mere handful of collisions with the requisite characteristics.

While the discovery of the Higgs boson  and subsequent measurements leads researchers to believe that the theory first written down in 1964 by Higgs and Englert and others is correct, there remain some significant residual mysteries. Among them: Why does the Higgs boson have the mass that it does?   And why is there a Higgs field at all? First and foremost is the fact that the Higgs theory is not motivated by a deeper theoretical framework. It is simply added on. In its simplest form, the Standard Model (which is the leading theory of subatomic interactions) predicts that all fundamental subatomic particles are massless. This is in direct contradiction to measurements. The Higgs theory is added, kind of like a theoretical Band-Aid, to the Standard Model. Because the Higgs theory can explain the mass of these particles, the Higgs theory has now been subsumed within the Standard Model.

But it's still a Band-Aid, and that's an unsatisfying state of affairs. Perhaps by studying interactions between Higgs bosons and the particles with which they interact most strongly, we'll uncover some behavior that points to a deeper and more explanatory underlying theory.

Although today's announcement involves only a small number of collisions in which top quarks and Higgs bosons are created, in the future it will be possible to study this process with much greater precision. The LHC is operating superbly, but by the end of 2018, it will have delivered only 3 percent of the data it is expected to deliver. At the end of 2018, the LHC will shut down for two years for upgrades and refurbishments. In 2021, the collider will resume operations with a vengeance, operating through 2030. Over that period, scientists expect to record 30 times more data than will have been collected by the end of this year.

It's hard to know what we will find. The LHC and associated detectors are extraordinary pieces of technology and it is actually likely that they will deliver even more data than predicted. With that much data, it is quite possible that scientists will uncover some new phenomenon that has not been discovered, but which will require that we rewrite the textbooks. That's not a guarantee, but one thing is certain: Today's announcement lays out a clear path to better understanding the origins of mass.

Editor's Note: Don Lincoln is a physics researcher at Fermilab. He is the author of "The Large Hadron Collider: The Extraordinary Story of the Higgs Boson and Other Stuff That Will Blow Your Mind" (Johns Hopkins University Press, 2014), and he produces a series of science education videos. Follow him on Facebook. The opinions expressed in this commentary are his.