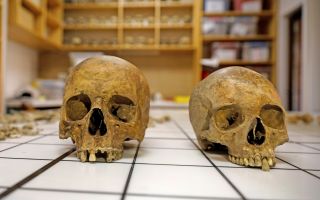 Skulls from a Roman-period sarcophagus were found at an archaeological site in the ancient city of Viminacium, now Kostolac, Serbia.
(Image: © Marko Djurica/Reuters/Newscom)

The archaeologists found the intact sarcophagus in Viminacium, an ancient Roman city that got its start more than 2,000 years ago, located in modern-day Serbia.

One of the skeletons belonged to a tall, middle-age man, and the other was of a slim, younger woman, said Ilija Mikic, an anthropologist at the Archaeological Institute of Serbia, as reported by Reuters.

The female's remains were elegantly adorned with golden earrings shaped like flowers, a necklace and expensive hairpins, as well as three glass perfume bottles and a silver mirror. The man was buried wearing a silver belt buckle and shoes. [Photos: Gladiators of the Roman Empire]

"According to grave goods ... we can conclude that these two people surely belonged to a higher social class," Mikic told Reuters.

Archaeologists have studied Viminacium for nearly 140 years. The ancient city, about 40 miles (70 kilometers) east of Belgrade, was once a military camp and the capital of the Roman province of Moesia Superior, dating to the first century A.D. It had a bustling city center complete with a horse- and chariot-racing stadium known as a hippodrome, fortifications, a forum, a palace, temples, amphitheaters, aqueducts, baths and workshops, according to Reuters.

Up to 40,000 people lived Viminacium in ancient times, but only about 4 percent of the city has been intensely explored so far, Miomir Korac, an archaeologist and the site's director, told Reuters.

Most of the Roman settlements found in places like London, Milan and Belgrade have been buried beneath a modern city, Korac noted. That isn't the case for the settlement remains at Viminacium. "Only Viminacium with its 450 hectares [1.7 square miles] is an open area for exploration. And I am sure this will bring an immeasurable quantity of information," Korac told Reuters.

Since archaeologists began excavating Viminacium in 1882, they've found golden tiles engraved with Roman magical symbols, sculptures made of jade and marble, pottery, and mosaics and frescos, as well as about 14,000 tombs, Reuters reported.

The Huns conquered, and destroyed, Viminacium in the fifth century A.D., according to the Archaeological Institute of Belgrade. But the Roman emperor, Justinian, breathed new life into the city during his reign from A.D. 527 to 565. This rebirth was short-lived, as the Slavs razed Viminacium in the sixth century.

Given this tumultuous history, it's remarkable that the rectangular-shaped sarcophagus eluded looters, as well as plowing by farmers and the activities of local coal mine, Reuters reported.