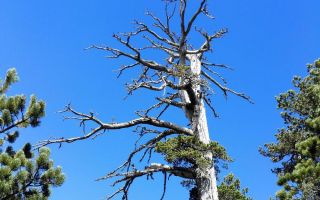 Perched high on a cliff in southern Italy, a bone-white pine tree has watched the Renaissance come and go, seen dozens of wars rage and resolve, and stood by as thousands of less-persistent organisms lived and died on the rocky slopes below. The tree, nicknamed Italus, has seen a lot. You would, too, if you were more than 1,200 years old.

With a life span of about 1,230 years, Italus has been deemed the oldest scientifically dated tree in Europe, according to a new paper published May 16 in the journal Ecology. The stately Heldreich's pine was discovered in an ancient grove among several other millennium-old trees in Italy's Pollino National Park, south of Naples. [Gallery: The Oldest Living Things in the World]

Italus, the oldest of the trees studied over a recent three-year survey, snags the title of Europe's oldest tree from the 1,077-year-old Bosnian pine known as Adonis, which was dated in Greece in 2016. Unlike Adonis, though, dating Italus wasn't as simple as counting rings; the old pine's insides were too mangled with age to get a clear reading.

"The inner part of the wood was like dust — we never saw anything like it," study co-author Alfredo Di Filippo, a professor in the Department of Sciences and Technology for Agriculture, Forest, Environment and Energy at Tuscia University in Viterbo, Italy, told National Geographic. "There were at least 20 centimeters [7.9 inches] of wood missing, which represents a lot of years."

To work around these missing years, the researchers took radiocarbon-dating samples from the tree's exposed roots to determine when the pine first began to bud. They also compared tree-ring counts from the pine's roots and what was left of the trunk, which grow at different rates but can still provide some ballpark date ranges to work from.

With these methods combined, the team estimated that Italus' first ring formed in A.D. 789, making it roughly 1,230 years old. (To put that into a historical perspective, Italus would have been sprouting just as the first Viking raiders landed in England.) And while the tree's battered core indicates it clearly went through some rough patches over the past 1,200 years, its rings have begun growing again in the past few decades, the researchers wrote. Italus could even live to be 1,300.

While Italus appears to be the oldest scientifically dated tree in Europe, there are numerous other trees throughout the continent thought to be in the multi-millennium club too but that just haven't been studied with such rigor yet.

The Llangernyw Yew in Conwy, Wales, for example, is thought to be between 1,500 and 5,000 years old, but it can't be dated accurately through tree-ring analysis, as its core has deteriorated so much over time. A massive oak tree named Kongeegen (or "the king oak") in Denmark's royal hunting forest is thought to be somewhere between 1,500 and 2,000 years old — but that, too, still needs to be scientifically verified. (According to the authors of the new paper, their combination carbon-dating/ring-counting method could potentially be used to calculate more accurate birth dates for other ancient trees like these.)

As for the world's oldest tree? That honor goes to an unnamed bristlecone pine tree in the White Mountains of California. The tree is more than 5,000 years old, making it a smidge older than the more famous, roughly 4,800-year-old bristlecone named Methuselah that lives down the road.

Meanwhile, a 9,560-year-old Norway spruce named Old Tjikko is considered the world's oldest individual tree belonging to a clonal colony — that is, a group of genetically identical trees that share the same root system but generate new trunks and branches over the millennia. Old Tjikko is suspected to be the only surviving trunk of an ancient clonal colony on Sweden.