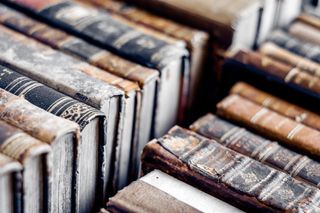 Three thieves who stole 160 rare books more than a year ago by rappelling down the skylight of a warehouse in London continue to evade police, leaving a series of mysteries in their wake.

Sometime between Jan. 29 and Jan. 30, 2017, the three thieves bored holes into the warehouse's skylight and rappelled down about 40 feet (12 meters), evading motion-sensor alarms. The books they stole included volumes written by Isaac Newton, Leonardo da Vinci, Nicolaus Copernicus and Galileo Galilei. Experts estimated the total value of the 160 books at around $2.5 million, the Guardian reported.

At the time, media outlets around the world dubbed the three individuals the "Mission Impossible" thieves, named after the movie franchise whose main character, Ethan Hunt (played by Tom Cruise), uses the same technique to get inside buildings. [Cracking Codices: 10 of the Most Mysterious Ancient Manuscripts]

More than a year after the theft took place, Live Science talked with a number of experts to see if any of the "Mission Impossible" thieves had slipped up and revealed their identities, or if the books had reappeared.

The thieves (like the movie character), it seems, have done a good job of concealing their identities and the location of the stolen books, leaving nothing but a series of mysteries in their wake.

A spokesperson for Scotland Yard, the headquarters of the London Metropolitan Police, told Live Science that they still don't have any suspects or information on where the books are, but they continue to investigate.

Rare-book dealer Alessandro Meda Riquier, who owned 51 of the stolen books, told Live Science that he has no information on suspects or the location of the books. "The only things I can tell you are that, up to now, all the books are still missing and that I lost in the theft 51 books," he said.

Rare-book sellers have been on the lookout, in case the thieves try to sell their ill-gotten gains. "It would be very difficult for the thieves to reintroduce the books to the marketplace," said Tim Bryars, a dealer of antiquarian maps and books who is also a spokesperson for the Antiquarian Booksellers' Association.

As far as Bryars knows, the thieves haven't stolen any other rare books. "It was an unusual robbery; I haven't heard anything to connect it with any other thefts in the rare-book trade," he said.

However, other experts think the thieves may have gotten practice in the thievery of rare books before pulling off the heist that got them their "Mission Impossible" nickname. "I believe it is extremely likely that this was not a 'maiden voyage' for the criminals who perpetrated this crime," said Chris Marinello, CEO and founder of Art Recovery International. "I'm certain they have been involved in other thefts."

In the wake of the theft, investigators speculated that the thieves were hired by a collector who wanted the books — not to sell them — but to add to their collection. However, if this collector exists, they have also managed to conceal their identity and the location of the books.

If the criminals continue to evade the law, they wouldn't be the first thieves to pull off a massive theft of historical items and get away with it. In 1990, thieves stole 13 paintings valued at $500 million from the Isabella Stewart Gardner Museum in Boston. The paintings have not been recovered, and the identity of the thieves has yet to be confirmed. Rather than rappelling into the museum, the thieves disguised themselves as police officers and tied up the guards. The museum is still hopeful that one day the paintings will be found.