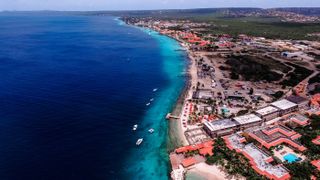 The island of Bonaire is a popular diving destination.
(Image: © Israel Gil Contreras/Shutterstock)

Hawaii may have started a trend. After the state banned the sale of reef-harming sunscreens earlier this month, the Caribbean island of Bonaire is following suite.

Hawaii's state legislature voted in May to ban the sale of sunscreens containing oxybenzone and octinoxate effective in 2021. These two chemicals have been shown in studies to damage coral by causing them to expel their symbiotic algae — a process called bleaching. The chemicals also impact free-swimming coral larvae, prompting them to prematurely excrete a hard skeleton. In tourist-heavy bays and inlets, sunscreen pollutes the water to a large enough extent to damage reefs, according to 2016 research published in the journal Archives of Environmental Contamination and Toxicology.

Bonaire is a popular tourist site for diving. It's a municipality of the Netherlands located in the Leeward Antilles, not far off the coast of Venezuela.

According to the Bonaire News, the island's council voted unanimously Tuesday (May 15) to follow Hawaii's lead in banning oxybenzone and octinoxate. The precise nature of the ban is yet to be determined, but the council voted to make the ban effective as of Jan. 1, 2021.

In Hawaii, stores will no longer be able to sell sunscreens with the reef-harming ingredients, both of which are chemicals that filter UV light. However, mineral-based sunscreens are still good to go. These sunscreens use materials such as zinc oxide to physically block the sun's rays. They aren't absorbed into the skin, and there is no evidence that they damage coral.

Oxybenzone and octinoxate are also banned or strongly discouraged at a handful of local natural areas around the world. Multiple parks in Mexico's Riviera Maya and surrounding region — including Xel-Ha Park, Cozumel's Marine Park, Chankanaab Beach Adventure Park and Xcaret Park — ban any sunscreen that is not "biodegradable." Approved sunscreens are all mineral-based.