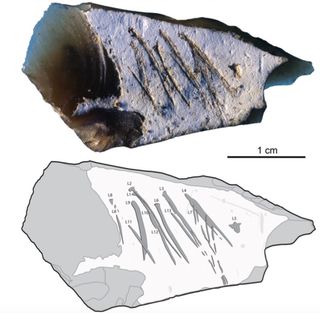 The engraved flint flake from Kiik-Koba, Crimea. The flint has 13 etch marks, which were likely made by one or multiple pointed stones.
(Image: © Ana Mahjkic et al./PLoS ONE/CC by 4.0)

A Neanderthal seems to have left a message etched in stone about 35,000 years ago, a new study finds.

An analysis of the slanted, zigzag lines — engraved on a piece of flint discovered at a Neanderthal site in Crimea — reveals that they likely weren't made willy-nilly. Rather, the Neanderthal artist would have needed excellent fine motor skills and attention to detail to etch the lines, which may carry symbolic meaning, the researchers said.

If this new interpretation is correct, the engraved piece of flint will join a growing list of artifacts showing that Neanderthals were likely complex beings who partook in symbolic activities, including intentionally burying their dead and decorating ornaments, the researchers said. [In Photos: Neanderthal Burials Uncovered]

In 1924, researchers discovered the Crimean site, a large cave known as Kiik-Koba , and were astonished to discover the remains of two Neanderthals — an adult and an infant — within it. Scientists also found hundreds of stone tools, including knives, borers and hand axes — and the engraved piece of flint. (Crimea is a peninsula in southeastern Europe between the Black Sea and the Sea of Azov.)

However, the flint used for the tiny tool wasn't locally sourced. Researchers couldn't find any local flint outcrops near the cave, and flint from distant outcrops, near the Crimean towns of Zuya and Belogorsk, is different from the flint uncovered at Kiik-Koba, the researchers wrote in the study, which was published online May 2 in the journal PLOS ONE.

The flint flake is small — just 1.4 inches long by 0.7 inches wide and 0.2 inches thick (about 35 by 18 by 5 millimeters), or slightly larger than the diameter of a half-dollar coin. A microscopic examination of the grooved lines indicated that they weren't made by accident by excavators or curators, the researchers said. They came to this conclusion after examining the sediment inside the lines and finding no detectable change in the patina inside or outside the lines.

Moreover, judging by the lines' depth, clean edges and internal parallel grooves, the 13 marks were likely carefully made by one or multiple pointed stones, the researchers said.

In other words, these marks aren't "but a scratch," as Monty Python fans would say, but rather an artistic endeavor by someone who had exceptional hand-eye coordination. In fact, its existence raises the question of how many times symbolic art evolved among hominin populations, the researchers said. For instance, about 540,000 years ago, Homo erectus likely carved an M-shaped engraving into a shellfish shell in Java, Indonesia, Live Science previously reported.

It's anyone's guess what the chicken scratches on the flint mean. The researchers ruled out absentminded doodling, as the lines are so precise, they would have required concentration to make. Nor do the groves appear to indicate ownership (i.e., someone's name), as there are many, perfectly good, unmarked flint flakes nearby. Some scientists who have studied other Neanderthal-made notches think that these marks might be numerical data, the researchers said.

Perhaps the carved lines were a piece of information or a form of communication that the creator passed on to another Neanderthal, the researchers of the new study said. What's more, it's possible that the stone's small size was a sign "intended to convey information only to a small number of individuals," the researchers wrote in that paper.

Whatever that Neanderthal’s message was, however, remains a mystery.