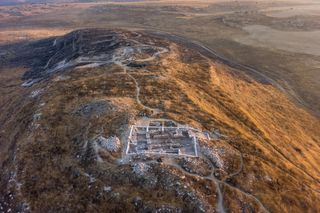 The massive house was dated to 3,000 years ago when the biblical United Monarchy supposedly existed.
(Image: © Griffin Aerial Imaging)

Archaeologists have discovered a sprawling, possibly 3,000-year-old house that suggests a biblical kingdom called the United Monarchy, ruled by King David and later Solomon according to the Hebrew Bible, actually existed.

The archaeologists who excavated the house, at a site now called Tel Eton, in Israel, said in an article published online March 13 in the journal Radiocarbon that the date, design and size of the house indicates that a strong organized government existed at Tel Eton around 3,000 years ago. They added that this government may be the United Monarchy.  The site is located in the central part of Israel in a region called the Shephalah.

The Hebrew Bible states that the United Monarchy collapsed after the death of King Solomon (an event some historians believe occurred around 930 B.C.). After that collapse, two rival Jewish kingdoms popped into existence — Judah (based around Jerusalem), and a kingdom to the north of Jerusalem that retained the name Israel. [Biblical Battles: 12 Ancient Wars Lifted from the Bible]

However, whether the United Monarchy actually existed and, if it existed, how large was it, are topics of debate among archaeologists and historians. Fewwritten records have been discovered in Israel that date back to the alleged Monarchy, and some scholars have contended that the surviving archaeological remains indicate that a powerful United Monarchy did not exist. Regarding written records, archaeologists have discovered a 3,200-year-old Egyptian stele written in the name of pharaoh Merneptah that mentions the name"Israel" briefly.

Excavated between 2006 and 2015, the two-story house is constructed partly of ashlar stones. The ground floor is about 2,500 square feet (230 square meters) in size, putting it among the largest 1 percent of buildings that existed in the region around 3,000 years ago, Avraham Faust, an archaeology professor at Bar-Ilan University who leads excavations at Tel Eton, told Live Science.

"[The house] is located in the highest part of the mound, in an area which dominates large parts of the city as well as agricultural lands and roads below it," and was likely occupied by a senior official, wrote Faust and archaeologist Yair Sapir, in the Radiocarbon article.

Before construction of the house began, a 3,200-year-old chalice was buried in what archaeologists call a foundation deposit. To confirm when the house was constructed, the archaeologists radiocarbon dated four artifacts — a piece of charcoal found by the chalice, another piece of charcoal found within the remains of a floor above the chalice and two olive pits found within the remains of the house's floor.

The house is oriented toward the east and consists of a long house that is divided into four areas — three long spaces at the front and a long space in the back — that are then subdivided. Israelites frequently built houses with this type of design; non-Israelites did not, Faust told Live Science. This evidence strengthens the argument that the United Monarchy existed and had some degree of power at Tel Eton, he said. [The Holy Land: 7 Amazing Archaeological Finds]

Additionally, the archaeologists found that Tel Eton was fortified around 3,000 years ago, something they believe strengthens their argument that a powerful government existed at Tel Eton. They also point out that other sites dating back 3,000 years ago have been found in Israel that could be connected to the United Monarchy, including Khirbet Qeiyafa, a fortified hilltop city located 19 miles (30 kilometers) southwest of Jerusalem.

In their paper, Faust and Sapir argue that evidence supporting the existence of the United Monarchy is often not studied because of a problem they call the "old house effect."

The site of Tel Eton, including the massive house, was destroyed by the Assyrians during the eighth century B.C. As such, the house held a vast amount of remains dating to that century, but relatively few remains that date to 3,000 years ago when the house was first built.

This "old house effect" is a problem commonly seen in Israel and at archaeological sites in other countries, the archaeologists said. "Buildings and strata can exist for a few centuries, until they are destroyed, but almost all the finds will reflect this latter event," wrote Faust and Sapir, noting that archaeologists need to be careful to dig down and find the oldest remains of the structures they are excavating so they don't miss remains that could provide clues to the United Monarchy.

Israel Finkelstein, a professor at Tel Aviv University who has written extensively about the United Monarchy debate, expressed skepticism about the results.

Two of the four samples used for radiocarbon dating are olive pits, which pose a problem, he said. "The single olive pits come from fills [material that accumulated on the surface of the floor before the floor broke apart]. They have no importance whatsoever [for] dating the building. At Megiddo, my dig, samples like this, single items/fills, are not being sent to the lab to be dated, because they enter bias into the dating system," Finkelstein said. "There is no connection whatsoever between the finds at Tel Eton and the biblical description of the United Monarchy."

Faust told Live Science he expects that some archaeologists would be critical of the use of material found in the remains of the floors for radiocarbon dating. He noted that all the radiocarbon dates, those from the olive pits and from the charcoal, converge around 3,000 years. "The convergence of the dates suggest that we are on safe grounds," Faust said. He also noted that one of the charcoal samples is not from the floor but from the foundation deposit (the chalice), strengthening the conclusion that the house was built around 3,000 years ago.