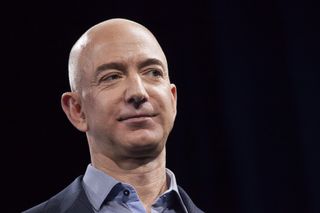 Jeff Bezos thinks that the brain uses one and a half times as much power as the rest of the body. He is wrong.

Bezos, founder and CEO of Amazon, made the wildly inaccurate scientific claim during an interview with Mathias Döpfner, CEO of the multibillion-dollar German media company Axel Springer. A transcript and video of the interview appeared on Business Insider, an American news site owned by Axel Springer. (Disclosure: This reporter worked at Business Insider between January 2016 and April 2017. For part of that time, Bezos was an investor in the site.)

While explaining why he thinks human beings need to colonize the solar system — an argument he framed in terms of Earth's limited energy resources — Bezos said this:

"Let me give you just a couple of numbers. If you take your body, your metabolic rate as a human, it's just an animal. You eat food; that's your metabolism. You burn about 100 watts. Your power, your body, is the same as a 100-watt light bulb. We're incredibly efficient. Your brain is about 60 watts of that."

That's probably a very interesting thing to say during splashy interviews and in business meetings. Unfortunately, it's also wrong.

Sam Wang, a neuroscientist at Princeton University and co-author of the book "Welcome To Your Brain" (Bloomsbury USA, 2009), told Live Science that the actual numbers are much smaller. The brain uses about 15 watts out of a typical body's total usage of 70 watts. That's a bit more than 20 percent, a much smaller proportion than the 60 percent Bezos claimed.

(The numbers here are somewhat approximate and may vary slightly. In Wang's book, the number he cited was 12 watts. In any case, Wang wrote in his book that the brain uses about as much power as the little light in the back of a refrigerator. Sixty watts is about the power consumption of a typical incandescent bulb you'd find in an old lamp. A 100-watt incandescent light bulb is bright enough to light up a large room.)

This isn't exactly new information. Wang said these numbers have been known for more than 50 years and date back to a series of experiments by the scientist Louis Sokoloff in the 1950s and 1960s who traced glucose — the compound the body uses to deliver energy — through the body.

In small children, the proportion could be closer to what Bezos claimed, Wang said, with the brain zapping up to about half of the body's total wattage. But that's still shy of a full 60 percent.

It's a bit ironic that Bezos made this particular flub. The billionaire Princeton grad donated $15 million in 2011 to the Princeton Neuroscience Institute where Wang teaches, establishing the Bezos Center for Neural Circuit Dynamics.

Bezos has received criticism for other statements he made during the interview with Döpfner.

When speaking of his own $112 billion net worth and his rocket company Blue Origin, Bezos said, "The only way that I can see to deploy this much financial resource is by converting my Amazon winnings into space travel. That is basically it."

On April 15, The Sun broke the news that Amazon warehouse workers — Bezos' employees — in England peed in bottles rather than risk punishment for taking bathroom breaks during their 10-hour shifts. Business Insider reported that many workers also avoided drinking water and didn't take sick days because they didn't want to risk missing quotas in the warehouse and losing their jobs.

Amazon did not return Live Science's request for comment.