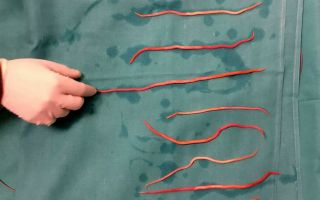 If the idea of a single 7-inch (18 centimeters) worm wriggling inside your body sounds horrifying, try 14 of them. That was the case for a woman in India who had more than a dozen squirming roundworms pulled from her bile ducts.

The 38-year-old woman went to the hospital after experiencing severe abdominal pain, fever, vomiting and episodes of jaundice (yellowing of the skin and eyes) for six months, according to South West News Service (SWNS).

"My pain was so bad that I could barely stand on my feet," the woman, whose first name is Sunita, told SWNS. She added that she lost more than 26 lbs. (12 kilograms) in about one month during her illness. [8 Awful Parasite Infections That Will Make Your Skin Crawl]

Sunita was originally misdiagnosed and was given antibiotics before doctors found the real cause of her symptoms: A CT scan revealed 14 roundworms in her bile ducts, the tubes that carry bile from the liver and gallbladder to the small intestine. The roundworms were about 6 to 8 inches (15 to 20 centimeters) long.

The SWNS report did not specify the exact type of roundworm that was removed from the woman's gut. However, Dr. Peter Hotez, the dean of the National School of Tropical Medicine at Baylor College of Medicine in Houston, said that the worms appear to be Ascaris lumbricoides, a type of intestinal parasite. This parasite is "one of the most common agents of human disease in the world," said Hotez, who was not involved in the woman's case.

An estimated 800 million people worldwide have Ascaris worms in their intestinal tract, Hotez told Live Science, and the roundworm is extremely common in India.

People become infected with this worm when they ingest eggs from the parasite, and this can happen when people eat fruits or vegetables that have been grown in contaminated soil, according to the Centers for Disease Control and Prevention.

And it's not that uncommon to see Ascaris in the bile ducts, Hotez said. Although the worms live in the small intestine, "they'll wander out of the intestinal tract and into the bile duct, where they can cause obstruction," he said. This complication is seen more often in adults than in children. But in kids, a large number of these worms can block the intestine and cause life-threatening complications, he added.

In Sunita's case, doctors removed the worms with the help of an endoscope — a long, flexible tube with a camera attached that reaches the bile ducts through the mouth. This procedure does not require surgery, her doctors said.

"Once [Sunita was] properly diagnosed, we managed to remove all the roundworms endoscopically in a single session," Dr. Arvind Khurana, head of gastroenterology at Fortis Hospital in New Delhi, who treated the patient, told SWNS.

Sunita is now pain-free and recovering, according to SWNS.