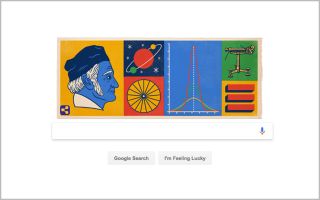 The Google Doodle today (April 30) commemorates the math and science achievements of Johann Carl Friedrich Gauss, widely known as the "prince of mathematicians," on what would have been his 241st birthday.

Born in Germany in 1777, Gauss was recognized as a math prodigy when he was still a young boy; he earned acclaim for the swiftness of his numerical calculations, and later made groundbreaking contributions to the fields of number theory and algebra. He also used mathematics to successfully predict the reappearance of the "missing" Ceres, the largest known asteroid in our solar system, which had disappeared behind the sun shortly after its discovery in 1801, before its orbit could be mapped. [The 11 Most Beautiful Mathematical Equations]

Gauss delivered his astounding calculation about the probable orbit of Ceres when he was only 24 — his efforts marked his introduction to astronomy, which then became a focal point of his career for the next 50 years, according to a paper presented in 1977 at a symposium held on the bicentennial of his birth. The paper was published by the Royal Astronomical Society of Canada.

At age 30, Gauss was appointed professor of astronomy at the University of Göttingen in Germany, and from 1816, he lived and worked at the astronomical observatory building there, according to the university's website.

In his later years, Gauss studied Earth's electromagnetic field, inventing the magnetometer — an instrument for measuring magnetic forces — in 1833. That same year, he also invented one of the first telegraph machines, several years before the telegraph was introduced in America by Samuel Morse, University of Göttingen representatives wrote in a biography of the mathematician and astronomer.

Gauss developed the electromagnetic telegraph with a colleague at the University of Göttingen, the physicist Wilhelm Weber, and they used it to send communications between their two offices, according to the biography. One of the first messages they transmitted was the sentence "Knowing above believing, reality above appearance," and it took about 4 minutes and 30 seconds to transmit.

When Gauss died of a heart attack, in 1855, his contemporaries mourned his loss, describing him as "a prince of science," and in 1856 he was posthumously honored by King George V of Hanover with a medal inscribed to "Mathematicorum Principi" — "the Prince of Mathematicians," the University of Göttingen reported.