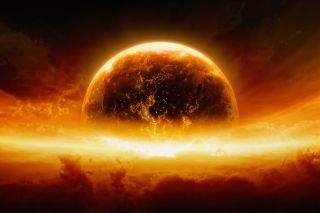 The latest doomsday prediction points to April 23, 2018, as the end.
(Image: © iStock/Getty Images Plus)

Call it the recycled doomsday: A new prediction for the end of the world sets the apocalypse date as Monday, April 23, based on a mishmash of old numerology, re-readings of the biblical Book of Revelation and rehashed conspiracy theories about a rogue "Planet X."

Even the calendar date of the prediction, April 23, hearkens back to one of the most famous failed apocalypse predictors of all time, William Miller. A Baptist preacher whose followers would eventually form the Seventh-day Adventist Church, Miller predicted multiple doomsday dates in the mid-1800s, including one on April 23, 1843. He was most famous for a later prediction of Oct. 22, 1844, a date that would live on in infamy as "The Great Disappointment" when Jesus Christ did not appear to kick off the end of the world. [End of the World? Top 10 Doomsday Threats]

The latest doomsday predictor with a slippery grasp on dates is David Meade, who previously claimed that a rare alignment of stars on Sept. 23, 2017, heralded the end. Meade said that the star alignment would precede the passage by Earth of a rogue planet called Planet X, which would cause all sorts of geological trials and tribulations, culminating in the eventual return of Jesus per the Book of Revelation.

Meade's new prediction is more of the same. According to an interview with the Express tabloid, Meade has now pegged April 23, 2018, as the new apocalypse start date. The reason, he said, is that on that date, the sun, moon and Jupiter will align in the constellation of Virgo, echoing Revelation 12:1-2, which refers to a "woman clothed with the sun, with the moon under her feet and a crown of twelve stars on her head" laboring to give birth to an eventual global dictator with a role to play in the end of the world.

This same passage was Meade's basis for predicting Sept. 23, 2017, as the start of the apocalypse, though in that case, he fixated on an alignment of the sun in Virgo with nine stars and the planets Mercury, Venus and Mars. [10 Failed Doomsday Predictions]

"Some of Meade's astral speculation ironically might echo at least some of the inspiration of the original, which draws on older Jewish, Greco-Roman, and other traditions," said Allen Kerkeslager, a professor of ancient and comparative religion at St. Joseph's University in Philadelphia.

"But the author of Revelation was wrong in his predictions, so neither this book nor any other ancient book is of much relevance for predicting the future," Kerkeslager told Live Science.

Meade has never been consistent with his predictions. The International Business Times reported in February that he was calling March 2018 as the trigger date for the apocalypse. He has also said he believes that a seven-year tribulation period preceding the end started on Aug. 21, 2017, and Oct. 15, 2015. Meade's website also dwells on North Korea's nuclear program as a sign of the End Times.

Meanwhile, the existence of Planet X, sometimes known as Nibiru, has been repeatedly debunked. Astronomers are searching for a possible Earth-size world in the outer solar system that they sometimes call "Planet X" or "Planet Nine," but this is not the same Planet X described by conspiracy theorists. In the conspiracy view, NASA is hiding the existence of a rogue planet that is hurtling toward Earth, ready to spark all manner of tsunamis and earthquakes as it zings by.

Nibiru originated from doomsday theorist Nancy Lieder. On her website, Lieder channels aliens called Zetas and peddles a complex web of interrelated conspiracy theories. Lieder first floated the idea of Nibiru in the 1990s and predicted its passage by Earth in 2003. Since then, the rogue planet has become the bogeyman of multiple doomsday predictions, including the 2012 Maya apocalypse, which was based on the supposed end of the ancient Maya calendar.

A rogue planet moving through the solar system would be pretty obvious to astronomers, who can detect planets far beyond our home solar system by looking for the wobbles their passage causes in the stars they orbit.

The mishmash of all of these disparate theories — from the biblical, to the cosmological, to the political — may be a symptom of the kind of conspiracy cross-pollination that occurs online. Meade is active on YouTube, where he chats with other doomsday "prophets" such as Paul Begley, host of the self-produced show "The Coming Apocalypse." Meade also sells self-published books about his theories on Amazon.