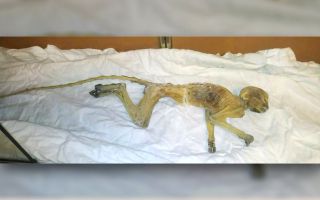 This mummified squirrel monkey was found in the ceiling of an old Minneapolis department store during renovations.
(Image: © Old Minneapolis)

There is a mummy mystery in Minnesota: How did a dead monkey end up in a department store ceiling?

The mystery broke on April 8, when an image of the "mummified" monkey appeared on the Old Minneapolis Facebook page. The photo was submitted by a man who claimed to be working on the renovation of Dayton's department store (a 100-year-old institution that's being converted into a shiny, new commercial space) in downtown Minneapolis.

The photo showed what appeared to be the long-dead remains of a monkey — desiccated, yellowed with age and sliced across the abdomen with a horizontal gash. The photographer said he found the "perished primate" while renovating the department store's ceiling. [Gallery: The Best Monkey Mug Shots]

Where did this monkey come from? How did it end up in a department store ceiling? Who — or what — inflicted that nasty cut? Readers of Old Minneapolis filled the Facebook page with theories.

Several readers trawled up advertisements from the '50s and '60s, publicizing the pet store that used to inhabit Dayton's upper levels. The newspaper clipping advertises "hilarious monkeys" for sale (including squirrel and spider monkeys), as well as tropical fish and mynah birds. Another reader recalled a former co-worker who said he had worked at Dayton's for 50 years; once, a monkey escaped into the ductwork on the seventh or eighth floor, the man said, and was killed there by the blade on an exhaust fan.

So far, only one family has claimed credit for the mysterious "monkeycide." Regan Murphy, the mayor of nearby Robbinsdale, said it was likely his father's doing.

“My dad [Larry] once stole a monkey from a Dayton's display back in the '60s,” Murphy tweeted.

Larry and his buddy were apparently playing hooky from high school one afternoon when they ended up at the department store's pet shop. The boys allegedly smuggled a monkey out of the building under one of their jackets and brought it back to Larry's place. When Larry's mom came home to a trashed house reeking of monkey business, the boys were ordered to take their prize back to Dayton's, the story goes.

"They went back in the store, put him on an escalator and left the store," Murphy told the Star Tribune. From there, perhaps, the monkey made its way into the ceiling ducts.

That's one explanation, anyway. According to the BBC, building officials are working with local museums to find out which stories are true and which are mere monkeyshines.

But for now, here's one mystery solved: The monkey depicted in the photo is "most definitely a squirrel monkey," Mary Blair, a primatologist and director of biodiversity research at the American Museum of Natural History, told Live Science in an email.

Squirrel monkeys primarily live in tropical rainforests in Central and South America, and they have long been the victims of black market pet trading. Maxing out at about a foot (30 centimeters) in height, squirrel monkeys are small, easy to smuggle and can be sold alarmingly cheaply. One old Dayton's clipping advertised the pets at $18.88 each. Sale ads for these monkeys even showed up in the backs of comic books.

According to Primarily Primates, a nonprofit sanctuary for discarded pets and non-native animals, there are no federal laws banning primate ownership, although importing primates as pets is forbidden. The nonprofit was founded in the '70s, specifically to help resettle squirrel monkeys that had been abandoned as pets.