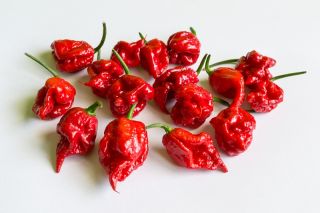 Biting into the "hottest pepper in the world" sounds painful enough. But for one man, the daring feat resulted in excruciating headaches, known as "thunderclap" headaches, according to a new report of his case.

The 34-year-old man ate the pepper, a Carolina Reaper, as a part of a hot-pepper-eating contest. This particular pepper is considered the hottest chili pepper in the world, according to the report, published today (April 9) in the journal BMJ Case Reports. (The Carolina Reaper has a "heat" of about 1.5 million Scoville units, according to Guinness World Records; for comparison, a jalapeño comes in at around 5,000.)

Immediately after eating the pepper, the man experienced dry heaves; he then developed intense pain in his neck and back of his head. Over the next few days, he went through several episodes of brief but excruciating headaches. These types of headaches are known as thunderclap headaches; they strike suddenly and peak within 60 seconds, according to the Mayo Clinic. [Ouch: 10 Odd Causes of Headaches]

The headaches were so painful that the man went to the emergency room. Doctors performed several tests for neurological conditions, which came back negative.

But then, a CT scan revealed that several arteries in the man's brain had narrowed. Doctors determined that the man's headaches were caused by a condition known as reversible cerebral vasoconstriction syndrome (RCVS).

In cases of RCVS, a person's brain arteries temporarily narrow, but this goes away within days to weeks. Sometimes, this condition can occur as a reaction to certain prescription drugs, or to illegal drugs such as cocaine or ecstasy. In some cases, however, doctors never determine the cause of RCVS.

In this man's case, the RCVS could have been due to eating the Carolina Reaper, the report said. This is the first time that doctors have reported a link between eating chili peppers and RCVS, said study co-author Dr. Kulothungan Gunasekaran, an internal medicine physician at Henry Ford Hospital in Detroit, who treated the patient.

Gunasekaran said that he and his colleagues would not necessarily tell people to avoid Carolina Reaper peppers. But "we would recommend the general public be cautious about these adverse effects" and seek medical attention immediately if they develop sudden headaches after eating hot peppers, Gunasekaran told Live Science.

The man's symptoms improved without any specific treatment. Five weeks later, another CT scan showed that his brain arteries had returned to normal. He had no further thunderclap headaches.