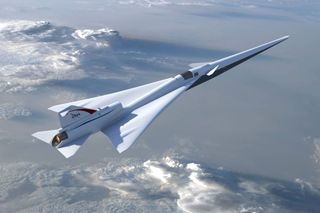 Listen closely: A quiet, supersonic jet capable of blasting through the sound barrier without emitting a sonic boom could pass over your home as soon as 2022. A decade later, you might even be able to ride in one.

NASA and Lockheed Martin Aeronautics Co. are working together to build an experimental plane (or "X-plane") called the Low-Boom Flight Demonstration (LBFD), which will reduce the sonic boom synonymous with high-speed flight to "a gentle thump," NASA representatives said at a news conference today (April 3).

The agency has awarded Lockheed Martin a $247.5 million contract to construct a working version of the sleek, single-pilot plane by summer 2021 and should begin testing over the following years to determine whether the design could eventually be adapted to commercial aircraft. [Supersonic! The 11 Fastest Military Planes]

"I believe today is a new beginning for NASA aeronautics," Jaiwon Shin, associate administrator of NASA's Aeronautics Research Mission Directorate, said at the news conference. "Our long tradition of solving the technical barriers of supersonic flight to benefit everyone continues."

The X-plane will be about the length of an NBA basketball court, will fit a single pilot and will fly at about 940 mph (1,510 km/h) at an altitude of 55,000 feet (16,800 meters). If all goes according to plan, spectators on the ground should barely be able to hear the plane as it rips through the sound barrier high overhead. (The speed of sound, also known as Mach 1, varies depending on air pressure and temperature but is roughly measured at about 758 mph or 1,220 km/h.)

NASA has been designing the plane for several years and studying sonic booms since the 1940s. The trick to evading those thunderous, midair roars is in the LBFD's sleek design, NASA said.

Sonic booms occur because air reacts to a speeding plane much like water reacts to a boat: The plane pushes air molecules aside as it passes, compressing them together into waves. If the plane is traveling at supersonic speeds, the resulting shock waves spread out in every direction at the speed of sound — creating a continuous, thunderous boom audible for miles around. The bigger the aircraft, the more air is displaced, and the louder the boom.

The LBFD's sleek shape will scatter those shock waves in a way that prevents them from converging into such ear-shattering blasts, NASA officials said. The design has already been tested in computer simulations and wind-tunnel experiments, but it will soon get its first exposure in the open air.

Supersonic flight has been banned on overland commercial flights since 1973. (The Concorde, a commercial supersonic jet that operated until 2003, primarily flew over the Atlantic Ocean). However, NASA hopes to gauge public acceptance of the new quiet supersonic technology by flying the LBFD over various U.S. towns and cities (which have yet to be selected) beginning in 2022. NASA aims to deliver the results of these tests to the Federal Aviation Administration by 2025, possibly leading to a revised set of guidelines that could make commercial supersonic flight a widespread reality.

Until then, keep listening for more updates from NASA and Lockheed Martin. If you're lucky, you won't hear a thing.