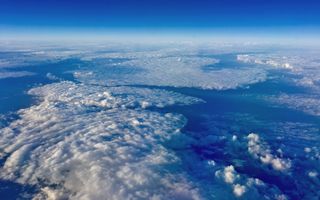 Sprinkling large amounts of salt into the atmosphere could stave off climate change, a group of researchers has proposed.

They've suggested that, because salt is highly reflective, it could potentially reflect sunlight back into outer space, helping to cool the Earth, they wrote in a report presented at the Lunar and Planetary Science Conference in Texas on March 21.

But other climate scientists aren't so sure. This idea falls into the category of geoengineering — a deliberate, large-scale attempt to change the environment as a means to counteract climate change. [Top 10 Craziest Environmental Ideas]

"It's an interesting idea," Michael Mann, a distinguished professor of meteorology at Penn State, told Live Science. But "most of these [geoengineering] schemes,though potentially appealing at the surface, are seen to be fraught with potential unintended consequences when you look at them in more detail."

The salty proposal is more of a last-ditch effort that could be used to offset climate change, in case humans fail to significantly lower greenhouse gas emissions, such as those of carbon dioxide, that are contributing to Earth's rising temperatures, Science magazine reported. The idea is to seed salt into the upper troposphere, the atmospheric layer most commercial airplanes fly over because of its weather conditions and clouds.

The idea was put forward, in part, by Robert Nelson, a senior scientist at the Planetary Science Institute, a nonprofit whose scientists study planetary systems, including the solar system.

Their proposal is hardly the first geoengineering idea out there. Other scientists have considered injecting tiny particles known as aerosols into the stratosphere, the region above the troposphere, as a way to cool the planet, Science magazine reported.

In effect, these particles — whether aerosols or kitchen table salt — could act like natural aerosols that cool the planet after a volcanic eruption. For instance, a series of stupendous eruptions from the Icelandic volcano Eldgjá from A.D. 939 to 940 led to one of the coldest summers the Northern Hemisphere had experienced in 1,500 years, Live Science previously reported.

However, many of the aerosols scientists have suggested using, such as diamond dust or alumina, are harmful to the ozone (a layer that protects the Earth's surface from some of the sun's ultraviolet rays) and human health. But in 2015, while studying evaporated salts on the surfaces of solar system bodies, such as the dwarf planet Ceres, Nelson realized that table salt was a possibility. It's more reflective than alumina and harmless to humans. In addition, if it were ground up into small particles and released into the upper troposphere, the salt would not block infrared heat released by Earth, which also helps the planet cool, he said.

But this proposal is still in its early stages, scientists told Live Science.

"It is hard to emphasize enough just how much further research would be needed to verify its applicability," said Kelly McCusker, a climate scientist at Rhodium Group, an independent research firm in New York City.

For starters, salt (NaCl) contains chlorine, "which is a constituent of ozone-depleting CFCs [chlorofluorocarbons] — so this could actually worsen ozone depletion," Mann said. While ozone depletion does not cause climate change, it's harmful to human health because it lets ultraviolet radiation into Earth, according to the Union of Concerned Scientists.

Simone Tilmes, a project scientist at the National Center for Atmospheric Research in Boulder, Colorado, added that salt often includes iodine, a reactive element that could not just impact ozone chemistry in the troposphere but also affect chemical reactions in the stratosphere.

Moreover, "the salt's reflectance has thus far been measured in a laboratory setting, and we don't know how its properties would change upon delivery (through a nozzle or some other device)," McCusker told Live Science in an email.

It's also unclear "how much [salt] would be needed to be deployed to reduce surface temperature, or how it would interact with water vapor, clouds and the atmosphere in general, to name just a few unknowns," McCusker said. [Doomsday: 9 Real Ways Earth Could End]

McCusker and Mann agreed that the best way to fight human-caused climate change is to reduce greenhouse gas emissions worldwide.

"The only safe way to tackle climate change is to address the root cause — our continued reliance on the burning of fossil fuels," Mann said.

Nelson couldn't be reached for comment, but told Science magazine that he plans to further study salt's properties to see how feasible the project is. What's more, he would like to engage with the public before implementing the salty mission, he said. But Nelson also acknowledged that salt can't solve Earth's long-term climate change challenges.

"This is a palliative, not a solution, somewhat analogous to the application of morphine in a medical situation," he and his colleagues wrote in the report.