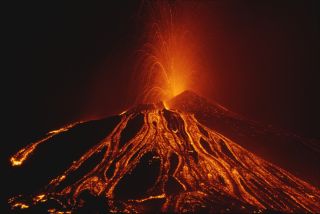 Sicily's Mount Etna, which is Europe's highest active volcano, put on a fiery show for weeks during the summer of 2002.
(Image: © Carsten Peter/National Geographic/Getty )

The volcano crept an average of about half an inch (14 millimeters) a year toward the Mediterranean between 2001 and 2012. But the creeping movement doesn't immediately raise the risk of danger from the volcano, which is an ever-changing environment already. For example, of more immediate concern: The mountain spewed ash and lava from a new crater starting in January 2017 through much of that year. As of January 2018, Etna was frequently burping ash and gases, according to the Smithsonian Institution's Global Volcanism Program.

However, the mountain's slow slide could be bad news in the long term for anyone on the downslope of Etna, volcanologist John Murray of the Open University in the United Kingdom and his colleagues reported March 23 in the Bulletin of Volcanologyjournal.

"[T]he geological record shows that such sliding volcanoes are prone to devastating sector collapse on the downslope side," Murray and his team wrote. These collapses are rare, the researchers added, but extraordinarily ruinous. [Mount Etna: Photos of the Largest Active Volcano in Europe]

Radiocarbon dating shows that Mount Etna has been a restless mountain for millennia. Its first confirmed eruption, according to the Smithsonian, was around 6000 B.C. Ancient people left records of the mountain erupting as early as 1500 B.C. Etna's current eruption is ongoing, and about 3 million people live within a 62-mile (100 kilometers) radius of the mountain, the Smithsonian says.

Between its major eruptions, Etna widens, Murray and his colleagues wrote. Part of the expansion is due to gravity pulling material down the mountain's steep slopes, and part is because the mountain's magma chamber expands between eruptions. GPS sensors on the mountain have shown that this expansion is not entirely symmetrical, however.

Murray and his team tracked Etna's movements in between eruptions, using data from between 2001 and 2012 from more than 100 GPS sensors on the mountain. (The exact number of sensors varied over time, because small eruptions regularly destroy the GPS stations, which are later replaced. Over the decade or so of this study alone, this happened to 20 of the sensors, the researchers said.)

The sensors revealed that all of Etna is sliding. The annual rate varied from about 0.4 inches (10 mm) to about 0.7 inches (17 mm) a year, averaging 0.5 inches (14 mm). The rock that Etna sits on, known as the "basement," is made of weak, flexible sediments. The whole mountain is thus sliding downhill on this basement, the researchers wrote. It's the first time an entire active volcano has been observed sliding along its basement rock, they added.

"I would say there is currently no cause for alarm, but it is something we need to keep an eye on, especially to see if there is an acceleration in this motion," Murray told BBC News.

If the sliding slows in the future, Murray continued, it probably won't cause any problems. If it accelerates or keeps up its pace, however, it could result in enormous landslides. A similar process occurred on the volcano of Socompa in Chile more than 7,000 years ago, leaving a huge debris deposit, the researchers wrote. The Colima volcano in Mexico also bears the scars of huge slope collapses, according to the Smithsonian.