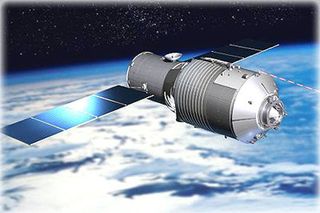 A Chinese space station is going to fall uncontrolled out of space, and now, trackers know when. Kind of.

Satellite trackers have speculated since at least 2016 about the probability of China's Tiangong-1 space lab slamming into Earth's atmosphere. The lab was China's first prototype space habitat, the site of the country's first orbital docking and long-term space stays. But, launched in 2011, it's long since reached the end of its operational life, and China appears to have no plans to boost it into a higher orbit.

More recently, Tiangong's fiery re-entry has looked a lot more imminent. But predicting when exactly the 8-ton (7.3 metric tons) vehicle would fall to Earth is a difficult challenge: As recently as March 2, the European Space Agency (ESA) couldn't get any more specific about the re-entry date than sometime between March 24 and April 19. But now trackers are getting a lot more specific: The lab should fall to Earth within a few days of the end of March.

Marco Langbroek, an archaeologist who has made a secondary career out of tracking satellites, predicted today (March 20) that the space station will re-enter the atmosphere within three days of March 31. That closely matches the ESA's latest forecast, issued Saturday (March 17), that the re-entry will occur between March 30 and April 6.

Knowing when the re-entry will occur is only half the story, though. The space station is moving too fast and is too uncontrolled for trackers to peg where it will enter the atmosphere any more specifically than somewhere between 43 degrees north latitude and 43 degrees south latitude. That's an area that includes Boston and Beijing, but also Buenos Aires, Argentina, and Brisbane, Australia. (Not to mention a whole lot of ocean.) Most of the populated world falls within the possible re-entry zone.

"At no time will a precise time/location prediction from ESA be possible," the ESA stated.

You don't need to worry about being hit by falling Chinese space debris, though.

As ESA put it, "the personal probability of being hit by a piece of debris from the Tiangong-1 is actually 10 million times smaller than the yearly chance of being hit by lightning."

Whatever bits of it don't break up in the atmosphere are vanishingly unlikely to hurt anyone at all — much less you or anyone you know — given the sheer vastness of unoccupied space on the planet.