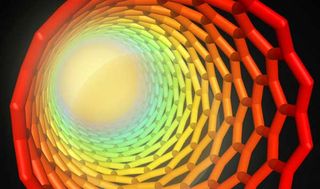 A carbon nanotube (shown in illustration) can produce a very rapid wave of power when it is coated by a layer of fuel and ignited, so that heat travels along the tube.
(Image: © Christine Daniloff)

Researchers have found a way to produce large amounts of electricity from tiny cylinders made from carbon atoms.

The achievement could replace decades-old methods of generating electricity, such as combustion engines and turbines, the researchers say.

In the future, coated carbon nanotubes crafted from individual atoms could power everything from cell phones to hybrid-electric vehicles. The team envisions such nanotube-based power being available to consumers in the next five years.

Carbon nanotubes are thin sheets of carbon rolled up into teensy tubes each with a diameter about 30,000 times smaller than a strand of hair.

When carbon — one of the most abundant elements on Earth — is rolled up into tubes, it exhibits some extraordinary properties such as high heat conduction, which the team exploited in the new study.

The researchers coated the nanotubes with a fuel, such as gasoline or ethanol, and applied heat to one end. The result:  The fuel reacts and produces more heat, which ignites more fuel to create even more heat.

The process creates “a wave that travels like dominoes falling in a line [down the length of the nanotube],” said study team member Michael Strano, a chemical engineer at the Massachusetts Institute of Technology (MIT).

The resulting heat wave, it turns out, also creates a wave of electrons moving in one direction – aka electricity.

“The thermal wave squeezes electrons out of the nanotubes like a tube of toothpaste,” Strano explained.

The devices built in the MIT lab produced 10 times more power than a lithium-ion battery of equivalent mass.

“What's intriguing about these waves is that we haven’t really done any engineering to make them efficient yet and already they’re ten times [more powerful than] a lithium-ion battery,” Strano told TechNewsDaily. “We may be able to make very very small power sources out of them."

The fuel-coated nanotubes could replace batteries for cell phones and other devices. Strano imagines a device with a button that you would push to create heat from friction, triggering the electricity-generating reaction inside the microscopic tubes.

These power devices could be made 10 times smaller than today’s cell-phone batteries but still hold the same amount of power. Furthermore, unlike today’s batteries, the carbon nanotube variety would not contain any toxic metals.

Strano said he was confident his team's discovery could be translated into commercial batteries within a few years.

“We have a lot of engineering challenges that we have to overcome in order to make this a commercial device," Strano said, "but nothing is as difficult as the initial discovery."

Strano and his colleagues detail their discovery in the March 7 issue of the journal Nature Materials.