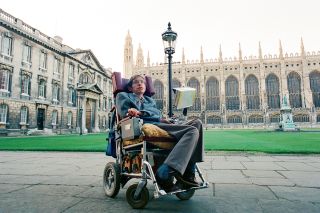 Stephen Hawking lived with amyotrophic lateral sclerosis (ASL) for most of his life. Above, a photo of Hawking in 1988.
(Image: © Brian Randle/Mirrorpix/Getty)

Renowned physicist Stephen Hawking, who died today (March 14) at age 76, battled amyotrophic lateral sclerosis (ALS) for most of his life.

But how did he live so long with the disease, and what factors ultimately lead to a person's death from ALS?

Hawking was a physics student at the University of Cambridge when he was diagnosed with ALS (also known as Lou Gehrig's disease) in 1963, and he was given just two years to live. The disease causes the progressive degeneration and death of the nerve cells that control voluntary muscle movements, including chewing, walking, talking and breathing, according to the National Institute of Neurological Disorders and Stroke (NINDS). There is no cure for ALS, and the disease is eventually fatal.

Although Hawking's cause of death has not been reported, his family said he died peacefully in his home, according to the BBC. "We are deeply saddened that our beloved father passed away today. He was a great scientist and an extraordinary man whose work and legacy will live on for many years," Hawking's family said in a statement. [How Stephen Hawking Transformed Humanity's View of the Universe]

Given that the average life expectancy after a diagnosis of ALS is about three years, Hawking was certainly an outlier — he lived for 55 years with the disease. Although no one knows how Hawking survived so long with the disease, researchers do know that the progression of the disease varies depending on the person.

Most people with ALS die from respiratory failure, which occurs when people cannot get enough oxygen from their lungs into their blood; or when they cannot properly remove carbon dioxide from their blood, according to NINDS. In ALS, this happens because the disease can eventually lead to paralysis of the muscles that control breathing, according to the Mayo Clinic.

Another possibly fatal complication of ASL is pneumonia, or an infection of the lungs. Patients with ALS are prone to developing pneumonia because difficulty swallowing can allow food, liquids or saliva to get into the lungs, according to the Mayo Clinic. Pneumonia can also lead to weakening of the respiratory muscles, which, in turn, can cause respiratory failure, according to a 2011 paper in the journal The Lancet.

In some cases, death may occur due to malnutrition and dehydration, according to The Muscular Dystrophy Association (MDA). This may happen because the muscles that control swallowing no longer function properly.

Some patients with ALS have been reported to have heart problems, such as arrhythmias or irregular heartbeats, and such problems may play a role in death in some cases, the MDA said.

In Hawking's 2013 memoir "My Brief History," he wrote that at the time of his ALS diagnosis, "I thought my life was over and that I would never realize the potential I felt I had," according to the BBC. "But now, 50 years later, I can be quietly satisfied with my life," he wrote.