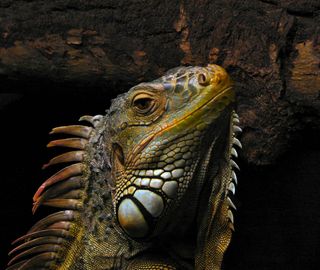 A team of scientists in Florida are on a three-month, $63,000 iguana-bashing spree.

The Florida Fish and Wildlife Conservation Commission contracted the 15-member crew from the University of Florida to develop a set of best practices for killing the big lizards, according to a March 9 report in the Sun-Sentinel. So far, bashing their heads in seems to be a winning method.

Well-equipped team members sometimes use a captive bolt gun to destroy the critters' brains. (Picture a mobile version of the device often used to kill cows in slaughterhouses.) But, the Sun-Sentinel reported, bashing their heads against the sides of solid objects, like trucks or boats, works just as well. [Iguana Facts]

Given that the team is hoping their results will offer practical advice to homeowners, cracking some lizard skull against whatever hard object is handy might be a bit more practical than methods requiring bolt guns.

Iguanas, native to South America, are an invasive species in Florida, where they likely arrived via the pet trade, according to invasive iguana researchers. They feed on local plants and wildlife, the Sun-Sentinel reported, and may indirectly contribute to erosion. They also do weird things like freeze and fall out of trees when it gets too cold.

Head bashing may be "gruesome," the researchers told the Sun-Sentinel, but it's also the most humane of the effective methods they've come up with. Simply chopping the lizards' heads off turns out to be less humane, and the traps the team set have thus far only captured raccoons. Working in teams of two, sneaking up on the lizards in the dead of night and bashing 'em seems to be the best method.

Not all Floridians seem thrilled with the project, which has reportedly killed 249 of the lizards so far. The Sun-Sentinel quoted a local veterinarian who suggested sedating and euthanizing the iguanas, and "Gary Fishman, a Boynton Beach resident, [who] says he’s killed more than 100 iguanas with a pellet gun to protect his landscaping," who told the Sun-Sentinel that the iguana "needs to be eliminated," but that he's a bit uncomfortable with the whole head-bashing thing.

You can read more about the project, which runs until May, at the Sun-Sentinel.