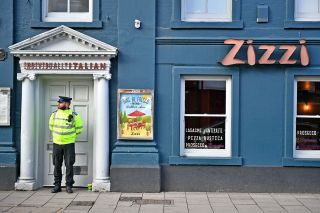 Former Russian spy Sergei Skripal and his 33-year-old daughter were found unconscious on a bench in Salisbury, near the above shopping center. Specialist units decontaminated the area by hosing it down.
(Image: © Ben Cawthra/Rex/Shutterstock)

U.K. investigators have announced that Ex-Russian spy Sergei Skripal and his daughter Yulia Skripal were likely poisoned by a nerve agent, according to The Guardian. Nerve agents are highly poisonous chemicals that can interfere with signaling from the nervous system, according to the Centers for Disease Control and Prevention. Both of the Skripals are still in intensive care.

It's not yet clear which kind of nerve agent was used or the long-term effects the poison will have on the Skripals if they survive this attack. But nerve agents, including sarin, soman, tabun and VX, can have long-lasting effects. For instance, when the Japanese cult Aum Shinrikyo attacked a man with VX nerve agent in 1995, the man survived but continued to feel numbness in part of his body and was reliant on an oxygen tube more than 20 years after the attack, Live Science previously reported.

Live Science published this article (below), at 7:11 a.m. EST today:

It's still a mystery as to what sickened former Russian spy Sergei Skripal and his daughter on Sunday (March 4) at a shopping mall outside London, but several clues point toward poison, toxicology experts told Live Science.

It's unlikely that radiation, harmful bacteria or a virus caused the Skripals to become unconscious, based on details reported in the media, said Dr. Lewis Nelson, chairman of emergency medicine at Rutgers New Jersey Medical School, who is not involved with the Skripals' treatment.

But while a fast-acting poison is the likely culprit, it's anyone's guess as to which one sickened the father and daughter, Nelson said. "There's hundreds, if not more, potential poisons that can kill your brain quickly," Nelson told Live Science. [5 Lethal Chemical Warfare Agents]

Unconscious on a park bench

The Skripal case has stumped U.K. authorities. Skripal is a former military intelligence officer for Russia who, in 2006, was sentenced to 13 years in prison after being convicted of spying on Russia for the U.K., according to NBC. However, Skripal was freed in 2010 as part of a U.S.-Russian spy swap, NBC reported.

On Sunday afternoon, Skripal, 66, and his 33-year-old daughter Yulia Skripal were found unconscious on a park bench in Salisbury, England, about 85 miles (136 kilometers) southwest of London. According to an eyewitness in an NBC video, the Skripals looked pale and stiff —Yulia's eyes were wide open, she was frothing at the mouth and vomit was pouring out of Sergei Skripal's mouth. Both were rushed to the intensive care unit of Salisbury District Hospital, Wiltshire Police said, according to U.S. News and World Report.

These details suggest that the Skripals weren't exposed to radiation. Radiation exposure would have led to inflammation or reddening of the skin, Robert Rice, a professor of environmental toxicology at the University of California, Davis, who is not involved with the Skripals' care, told Live Science. Moreover, symptoms from radiation poisoning take days to weeks to occur, and it appears that the symptoms developed quickly in the Skripals' case, Nelson said.

That said, former Russian spies have died from radiation exposure in the past. In 2006, former Russian agent Alexander Litvinenko was poisoned with radioactive polonium-210, U.S. News and World Report reported.

What's more, it's unlikely that the Skripals were exposed to a biological agent, such as harmful bacteria or a virus, Nelson said.

"There are no infectious organisms that work that quickly," Nelson said, noting that even the deadliest pathogens take hours to days to gravely sicken people.

Some poisons, in contrast, can strike within minutes, Nelson said.

For instance, Kim Jong-nam, the half brother of North Korean leader Kim Jong-un, was assassinated in the airport in Kuala Lumpur, Malaysia, in February 2017 after two women rubbed a poisoned cloth on his face. The poison — VX nerve agent — has deadly effects, including seizures and uncontrollable muscle spasms that stop the heart within minutes, Live Science previously reported.

Meanwhile, the Bulgarian dissident Georgi Markov was killed with the poison ricin when he was walking by London's Waterloo Bridge in September 1978, Reuters reported. An assailant stabbed Markov in the leg with an umbrella that had a ricin injector in its tip, Rice said. The former Soviet spy agency, the KGB, was accused of Markov's murder, according to Reuters. [Pick Your Poison: Some Venom Can Be Healing]

However, ricin-related symptoms typically take several hours to a day to occur, according to the Centers for Disease Control and Prevention, and the Skripals' symptoms seem to have developed more quickly, Nelson said.

Another fast-acting poison is cyanide, which Bosnian Croat war criminal Slobodan Praljak used to commit suicide at the Hague court in November 2017, according to the BBC.

It will take analytical toxicologists to determine the substance that sickened the Skripals. These toxicologists may use tools, such as mass spectrometry, that help them identify what kinds of molecules are in biopsies taken from the patients.

Meanwhile, U.K. authorities hosed down the area where the Skripals were found. This was a good idea because "dilution is pretty much the solution," when harmful chemicals might be in the area, Nelson said.