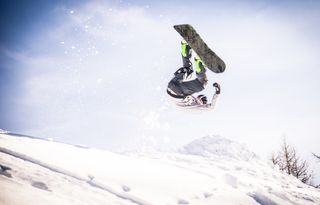 If you want to understand how snowboarders, skiers and other flipping, whirling Winter Olympians perform complex tricks while shooting through open air, you need to understand cats.

Cats always (or at least usually) land on their feet. Turn a cat on its back and drop it from 15 feet, and it will twist in the air and land on its feet. Drop it from 2 feet, or 200 feet, and you'll get the same outcome. (Note: Live Science encourages you to not drop a cat from 200 feet, or 15 feet for that matter.)

Remarkably, cats don't need any initial push to start to turn their feet toward the ground. Like an Olympic snowboarder suddenly twisting their board around after leaving the ramp, cats pull off their turns even when they don't have any rotational or angular momentum (think, spin energy) at all at the start of their fall. [These 7 Animals Would Absolutely Crush It at the Winter Olympics]

Without any leverage, or anything to push off of, cats (and snowboarders and skiers) can seem to generate momentum out of nowhere, and use it to turn themselves through the air.

"Asimple model for how a cat flips over is if you picture it as being a front half of a cat and a back half of a cat, so that the torso is two parts. It can bend its body sort of counterrotate the front and back half of the body," said Greg Gbur, a physicist at the University of North Carolina Charlotte.

Gbur told Live Science that if you drop a rigid object, like a pencil or even a sofa, how it moves through the air and spins is entirely a product of how it's dropped. If it starts its fall spinning, it will keep spinning. If it starts its fall without any angular momentum — rotational energy of an object — it won't turn.

And the total angular momentum of a flexible object, like a cat or an Olympian, can't change either without a push. That's Isaac Newton's first law of motion: An object in motion stays in motion, and an object at rest stays at rest. [The Twisted Physics of 5 Olympic Sports]

When a cat twists in the air, the average angular momentum of its whole body never changes. Its front and rear bend toward one another, then twist in opposite directions around a central point. The internal forces exerted — the muscles pulling against bone and other muscles — cancel one another out. The orientation changes, but from the perspective of the universe, the cat's angular momentum stays the same.

But what about Olympians who start their tricks turning slow, but suddenly turn faster or slower? Don't they gain or lose angular momentum?

"Unlike a cat, which tends to fall without any initial angular momentum, a snowboarder will deliberately push off of the edge of the track to give themselves some initial rotation," Gbur said

And the angular momentum of that rotation is a product of the "moment of inertia" or the radius of the mass spinning through the air — the distances between a skier's outstretched arms and the central axis of their rotation.

A big radius means more angular momentum; it takes a lot more energy to spin around 10 times with your legs and arms outstretched than if you tuck into a little ball. (This is one reason a very lightweight bicycle wheel spins with so much more force than the wheels attached to your rollerblades.)

So to speed up during a trick, an athlete will start with their body outstretched as much as possible, then tuck their arms and legs to shrink their total radius, Gbur said. With a smaller moment of intertia, the same angular momentum will make them spin much faster.

Want to slow down? Just stretch out, and the same angular momentum will slow your twist.