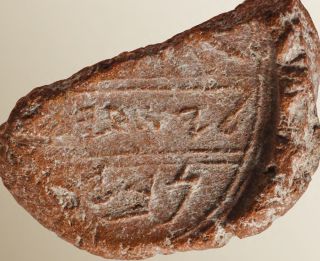 This 2,700-year-old seal impression contains the Hebrew name for "Isaiah" and may refer to the biblical prophet who lived at the same time.
(Image: © Ouria Tadmor/copyright Eilat Mazar)

Some 2,700 years ago, someone pressed a seal bearing the name Isaiah into a soft piece of clay, which hardened over time, say archaeologists who discovered the impression in Jerusalem.

If the seal was for the prophet Isaiah, it would be the first archaeological evidence of the Jewish prophet, who has a book in the Hebrew Bible named after him.

Isaiah, according to the Hebrew Bible, encouraged Hezekiah, king of Judah, to fight against the Assyrian army that laid siege to Jerusalem in 701 B.C. Isaiah advised Hezekiah to ignore Assyrian offers to surrender, and said that God would prevent Jerusalem from being captured. According to the Hebrew Bible, an "angel of the lord" destroyed the Assyrian army, while ancient Assyrian records claim that the army only left after Hezekiah agreed to pay a vast tribute. [The Holy Land: 7 Amazing Archaeological Finds]

Archaeologists discovered the seal impression during excavations in 2009 at the Ophel, an area in East Jerusalem located between the "City of David" archaeological site and the Temple Mount (a site also known as al-Ḥaram al-Šarīf). They found the impression of a King Hezekiah seal about 10 feet (3 meters) from the Isaiah seal impression, said the archaeologists, who are led by Eilat Mazar, an archaeology professor at the Hebrew University of Jerusalem's Institute of Archaeology.

Though Isaiah's name (which is "Yesha'yahu" in Hebrew) can be seen on the seal impression, archaeologists don't know if it refers to the Biblical Prophet Isaiah or someone else with that name who lived 2,700 years ago.

"We appear to have discovered a seal impression, which may have belonged to the prophet Isaiah, in a scientific, archaeological excavation," Mazar said in a statement.

If the seal impression can be identified with the Prophet Isaiah, it"would be the first archaeological and the earliest extra-biblical reference to the prophet Isaiah ever discovered," said Robert Cargill, an archaeologist and professor of classics and religious studies at the University of Iowa, who is also editor of Biblical Archaeology Review, which will publish the study.

The name Isaiah means "YHWH saves" or "Yahu saves," Cargill told Live Science, noting that there are other individuals in the Hebrew Bible who have it as part of their name.

Unfortunately, the seal impression is damaged — something that makes it difficult to determine whether the "Isaiah" in the impression is that of the prophet or it refers to someone else with the same name.

At the top of the seal impression, the lower part of a "grazing doe" can be seen, Mazar wrote in her article, noting that the doe is "a motif of blessing and protection found in Judah, particularly in Jerusalem."

In addition to the name Isaiah, the word "nvy" can also be seen in the seal impression. Archaeologists are not certain what exactly this word means. Mazar noted that if nvy included the Hebrew letter "aleph" at the end, it would form a word that means prophet; however, examination of the damaged portion of the seal impression didn't reveal any remains of the aleph, wrote Mazar.

Without an aleph, nvy could be a personal name, referring to a different Isaiah, rather than the title "prophet," Mazar wrote.

Even without the aleph, it's still possible that the word nvy could mean prophet, Mazar wrote. She noted that there are instances in the Hebrew Bible where the title "prophet" is spelled nvy — without the aleph.

The Ophel excavations are sponsored by Daniel Mintz and Meredith Berkman of New York. The discovery will be reported in a special double issue of Biblical Archaeology Review that is dedicated to the magazine's founder, Hershel Shanks, who is retiring as editor.