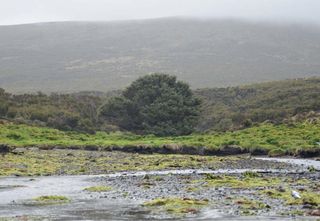 The loneliest tree in the world records the signature of humans' impact on planet Earth.

A single Sitka spruce (Picea sitchensis) that stands on remote Campbell Island, in New Zealand, holds within its heartwood the record of radiocarbon fallout from the aboveground nuclear testing that began in 1945. Shrubby plants on the island also retain this record, making it a truly global signal of human activity, researchers reported Feb. 19 in the journal Scientific Reports.

As such, the radiocarbon signature could be used to mark the start of a new geological epoch, the still-controversial "Anthropocene." Proponents of using this epoch argue that humans have had such a massive impact on the globe that their reign represents a clean break in history, much in the way the asteroid that killed the dinosaurs marked the end of the Cretaceous and the beginning of the Paleogene. [Wipe Out: History's Most Mysterious Extinctions]

The schism between the Cretaceous and the Paleogene periods shows up in the geologic record as a peak in the element iridium, which was likely caused by an enormous, iridium-rich asteroid hitting the planet. To define the Anthropocene as a real epoch, scientists need a similar bright line in the geologic record. Over the years, researchers have proposed numerous possibilities for this bright line, from an odd increase in greenhouse gases about 8,000 years ago, coinciding with human deforestation and the beginning of rice cultivation, to the rise in carbon in the atmosphere that started in the mid-1800s with the Industrial Revolution.

Another potential marker of the Anthropocene could be the huge boom in population and global activity that followed World War II, Chris Turney, a professor of Earth Science and Climate Change at the University of New South Wales, and his colleagues wrote. But this "Great Acceleration," as it is known, hit different parts of the world at different times, so it's not easy to find a global geological signal for when it began. Now, Turney and his team think the echoes of aboveground nuclear testing could be the answer.

The researchers turned to Campbell Island because the place is so remote that if something shows up there, it's likely to show up everywhere. The single tree on the island, a sprawling Sitka spruce, is non-native. It was planted in 1907 by Lord Ranfurly, the former governor of New Zealand, and it stood 30.3 feet (9.25 meters) tall as of 2011, a lone sentinel more than 100 miles (160 kilometers) from the nearest tree. [Nature's Giants: Photos of the Tallest Trees on Earth]

Turney and his team tested a slim core drilled from the spruce for carbon-14, a radioactive isotope of carbon sent hurtling into the stratosphere by aboveground nuclear testing. Researchers already knew that levels of carbon-14 peaked in the 1960s and decreased later, as international treaties restricted nuclear testing.

Plants take up carbon as they photosynthesize and grow, so this atmospheric peak appeared in the Sitka's cellulose. According to the researchers' measurements, atmospheric carbon-14 peaked between October and December 1965.

The native plants of Campbell Island told a similar tale. The researchers tested two long-living, broom-like shrubs, Dracophyllum scoparium and Dracophyllum longifolium, some of which date back to the late 1800s and tower up to 16 feet (5 m) over the landscape. These plants also recorded a rise in atmospheric radiocarbon, starting in 1954 and peaking in the 1965 to 1966 growing season. Similar levels have been discovered in Southern Hemisphere soils, Turney and his colleagues wrote.

Discovering these radiocarbon markers in some of the most remote plants in the world indicates that carbon-14 is a truly global marker, the researchers wrote, especially because most nuclear tests occurred in the Northern Hemisphere, and Campbell Island is very, very far south. Carbon-14 has a half-life of nearly 6,000 years, meaning the amount present decays by half approximately every 6,000 years, so the peak will be measurable for tens of thousands of years into the future, they added. Other radioactive materials with even longer persistence can be found in soils and marine sediments, so theoretical geologists millions of years into the future will still be able to measure the moment everything changed.