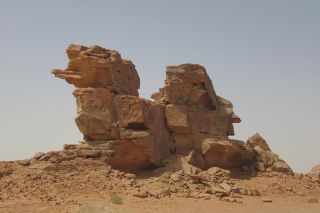 There's a place in the desert where the ghosts of camels seem to loom out of ancient rocks. Their faint smiles, humped bodies and even their heads are so old and eroded that a visitor could be forgiven for thinking their eyes were playing tricks on them. But the camel reliefs, along with perhaps some horse-like creatures, are real, the faded remnants of at least two schools of ancient sculptors on the Arabian Peninsula.

The Camel Site, as researchers call it, is spread across the Sakaka basin in Saudi Arabia's Jawf province. Time, human interference and erosion have worn away all tool marks and other signs of the camel reliefs' creation, making their authors difficult to identify and their origin difficult to date, according to a paper published Feb. 9 in the journal Antiquity.

The researchers estimate the creatures were sculpted some time between 100 B.C. and A.D 100, based on the similarities in artistic style with cultures that flourished during that era. [In Photos: See Other Mysterious Stone Structures in Saudi Arabia]

And, fascinatingly, there were two styles of camel relief visible in the basin.

One created images out of carving rocks to different planes of depth (high and low relief).

The other artistic school engraved the outlines of camels directly into the stone.

It's not clear exactly what purpose the camels served, but they likely had religious significance to the culture that created them centuries before the arrival of Islam, the researchers wrote. Certain societies of the era practiced rituals that involved touching body parts on graven images, and possibly supporting that idea is the smoothing — evidence of lots of humans' touches — on the front of some of the camels' faces.

The large stone images would also have been highly visible landmarks in the years after their creation, before the long passage of time, the researchers wrote; the carvings likely signaled the start of a well-traveled route through the desert.

In modern times, the researchers wrote, construction activities in the area and other human visitors threaten the ancient site.

"The main objective of this preliminary examination," they wrote, "is to generate awareness of endangered, cultural heritage and to ensure the rapid preservation of the site by the Saudi state."