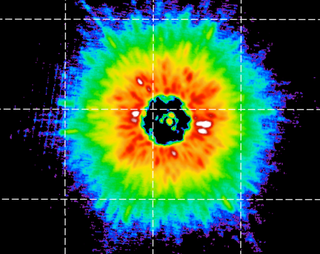 There are tiny comets orbiting foreign suns. And human beings can detect them.

Six times, about 800 years ago, dark things passed between the bright-yellow dwarf star KIC 3542116 and Earth. They were small in cosmic terms, about 330 billion tons (300 billion metric tons). That's about the size of Halley's Comet, or just one-245 millionth the mass of Earth's moon.

But they were big enough. They blocked a fraction of a fraction of the light that was streaming outward from that star. Eight hundred years later, the sensitive lens of the Kepler Space Telescope — a nearly meterwide piece of precision-cut glass floating in the darkness of space — detected that dimming as KIC 3542116's ancient light reached this solar system. [The 9 Most Brilliant Comets Ever Seen]

The star seemed to dim quickly, though nearly imperceptibly, as the small dark things passed in front of it (from Earth's perspective) six times between 2009 and 2013. Three times it dimmed deeply, and three times it dimmed faintly, at irregular periods over those four years.

This is a familiar signal to astronomers, the same sort of dimming that has allowed them to spot most of the 3,728 exoplanets discovered as of Feb. 2. But the small dark things acted like tiny planets only in the beginning of their trek. As they continued their journey across the plane of their star, the star only regained its brightness slowly, over the course of about a day.

That's not how exoplanets (basically great symmetrical orbs) look to Kepler. But it is how a comet, with its long dusty tail, would appear. In fact, it's how a team of astronomers predicted such comet passersby would look way back in 1999.

In a study due for publication Feb. 21 in the journal Monthly Notices of the Royal Astronomical Society (and first released in 2017 on arXiv), a team of researchers report that these dark objects are the first "exocomets," or comets in another star system, ever discovered.

The team wrote that they're not sure exactly how many comets there were, casting shadows on Kepler's lens during that period. It might have been six individuals, each making a single close pass to their star that showed up in Kepler's data. Or there may have been a smaller cluster, with some comets making multiple crossings.

Perhaps just one comet was orbiting its star very tightly, they suggest — though they were unable to fully figure out the orbit of a single comet that would have produced the six irregularly timed shadows.

The astronomers spent more than five months of hunting through more than 201,250 Kepler images before they found these six transits, and in all that time they found only one other likely comet shadow crossing another star. KIC 11084727, also a yellow dwarf, dimmed once, faintly, just like KIC 3542116 where the six shadows were found.

Those two stars are "near twins," the astronomers wrote. Both are very bright, and of similar size and magnitude. And they're somewhat unusual in the Kepler dataset, they wrote, which tends to target "cooler, sun-like stars." Perhaps, they suggested, comets (or at least comet transits visible from Earth) are more common around stars of this type.

Regardless of where more might be found in the future, these comets are the smallest objects humans have ever detected in alien solar systems. Previously, the authors wrote, the smallest thing ever spotted passing in front of its star was Kepler-37b. That tiny exoplanet is just 2,400 miles (3,860 kilometers) wide, or just a bit bigger than Earth's moon.