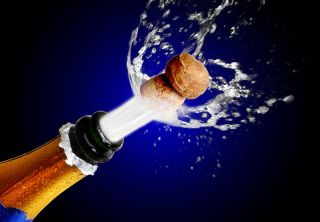 The tradition of drinking champagne to mark celebrations originated in the royal courts of Europe prior to 1789, where the expensive drink was viewed as a status symbol.
(Image: © Shutterstock)

Scientists have cracked a frothy mystery: the physics of fizz.

Many people know that frothy drinks get their pop and sparkle from tiny bubbles of carbon dioxide bursting out of their liquid mix. They might also know from experience that the harsh skittering of seltzer across a tongue feels different from the smooth foam of Champagne, the sweet effervescence of a cola, or the pizzazz of club soda. But until recently, scientists didn't know how differently carbon dioxide behaves in various drinks, or why.

A paper published Jan. 9 in The Journal of Physical Chemistry B offers the most complete answer yet to that question. A team of chemists from China's Jilin University and the University of Minnesota built complex models of carbonated cola (essentially, sugar and water), Champagne (alcohol and water) and club soda (salt and water) and studied them to figure out how these solutions change the behavior of dissolved carbon dioxide. They also built a model of pure carbonated water (seltzer), a substance whose physics are already well understood, to check that their models worked properly. [Raise Your Glass: 10 Intoxicating Beer Facts]

They found that for all three of the drinks they studied, carbon dioxide popped and fizzed out of the solution more slowly and less intensely than in pure seltzer water — but for different reasons.

In a carbonated drink, tiny clumps of CO2 are dissolved in the water, just like the sugar in a cola, according to the paper. But those clumps of CO2 don't dissolve very well, and as soon as the drink is exposed to open air, they start to burst out of the solution as bubbles, rise to the surface and disappear into the atmosphere.

That process doesn't happen all at once, the researchers found. This is because water is viscous — its H2O molecules cling to one another with charged bonds between their little Mickey-Mouse-ear hydrogen atoms and big oxygen atoms — so the CO2 must make its way through that lattice in order to escape.

So why do Champagne and cola hold to CO2 about as tightly as club soda, despite having fewer hydrogen bonds?

The researchers showed that sugar and alcohol actually change the entire shape of the water around them. Even as the hydrogen bonds to water molecules, preventing them from bonding to one another, they cause those molecules to squeeze closer to one another — crushing in more densely around all that dissolved CO2, and holding it in place effectively even without hydrogen bonds, the researchers explained.

This kind of modeling is important, the researchers wrote, because it helps answer basic questions about the physics, and flavor, of carbonated beverages in ways that are very difficult to accomplish with direct experiments. Because CO2 dissolves so quickly and readily in all of these drinks, from Champagne to seltzer, measurements of the variations between them are difficult to make, but they make a big difference in the drinks' flavors.