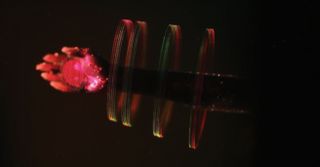 What did the image look like? Here's a guess: A blue, flickering image, projected on thin air, viewable from any angle — a bit like the holograms from the "Star Wars" films. ("Help me Obi-Wan Kenobi! You're my only hope!")

In the real world, though, looking at a hologram isn't so much like looking at a physical object. Lasers need to be used to project the image onto some medium, like a sheet of plastic and glass, which bends and reflects the light so the image appears three dimensional to a viewer. But they work only when the viewer's eye is in a pretty narrow plane of view, almost directly across from the projecting lasers. (HowStuffWorks has a pretty good explanation of this kind of system.)

Now, however, a team of researchers at Brigham Young University has developed a new device that creates truly sculpture-like, three-dimensional images that are sort of like holograms, but on steroids. Projections from their "Optical Trap Display" (OTD), described in a paper published Jan. 24 in the journal Nature, behave a lot more like that image of Princess Leia than any true holograms do. [Science Fact or Fiction? The Plausibility of 10 Sci-Fi Concepts]

The OTD takes advantage of a strange technology called the photophoretic optical trap, which allows researchers to levitate a small particle and pilot it through the air. The optical trap hits the particle with a beam of "near invisible" light, the researchers wrote. (The light has a wavelength of 405 nanometers, right at the low edge of what humans can perceive.)

That light heats the particle on one side — a speck of cellulose between 5 and 100 micrometers (a range between one-tenth the size of a typical bacterium to a bit more than the diameter of an average human hair). The uneven heating creates forces that act on the particle, the researchers wrote, causing it to move away from the hot side toward its cool side. The particle then acts like a little engine, zipping in whatever direction that's opposite to the way its heated side gets pointed.

Using this method, the team was able to precisely control the movements of the particle at speeds of up to 1,827 millimeters per second (71.9 inches per second, or about 4.1 mph) for hours at a time.

Once the particle was trapped, the team hit it with different-colored lasers as it moved. With the particle moving fast enough, it can smear that color and light across space from the perspective of a camera or human eye, creating the illusion of a fully 3D object.

And the effect is powerful. Using the OTD, the team created high-resolution, full-color images viewable from any angle — though they mostly occupied a small volume, just a few centimeters (an inch or two) on each side.

This image shows a prism, which looked completely different when seen from different angles, just like a real prism.

And this one shows a person in a long coat, with a zoomed-out version showing the projector setup.

The researchers were even able to build light sculptures that wrapped around other objects, like the small model of a human arm at the top of this article..

Of course, like any technology, the OTD has its limitations. The particle's top speed limits the size and complexity of the images the OTD can generate, and the current version creates a light "splash" on the surface opposite the lasers.

The next step, the researchers wrote, is to try to use different kinds of particles; work with multiple particles at once; and to improve the lasers' focus to solve at least some of these problems.