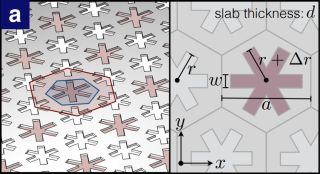 A diagram from the paper shows the shape and dimensions of the silicon design.
(Image: © Physical Review B)

Cut snowflakes out of sheets of paper, and you've got a nice winter art project. Grow a microscopic sheet of silicon crystal studded with snowflake-shaped holes, and you've got the thinnest sonic insulator ever designed, according to new research.

A team of physicists, writing in a paper published Jan. 18 in the journal Physical Review B, proposed the design for the nano-insulator. A flat, snowflake-studded slab, it would form an acoustic boundary — vibrations couldn't travel from one side to the other, but they could travel easily along its surface.

The basic principle is a lot like the curved walls of a luge course from the Winter Olympics: Sleds hit the boundaries at high speeds, but instead of crashing through them or bouncing away, they turn, following the new path. [The 18 Biggest Unsolved Mysteries in Physics]

Here's the problem this vibration-bending boundary is trying to solve: Waves spread out.

Drop a pebble in the smallest corner of a still pool of water, and ripples will soon distort the surface. Shine a bright light at night, and its wavelengths will travel miles to form pinpricks on people's retinas. This is useful for sending signals over vast distances, but it can be a problem when someone wants to finely control and direct a wave.

On the human scale, those kinds of vibrations can be very difficult to control. People can spend tens of millions of dollars building rooms insulated against sound, and even these rooms aren't perfectly silent.

And waves of physical vibration turn out to be a big deal at the nanoscale — especially when it comes to futuristic computing.

As the researchers wrote in the paper, an odd vibration could throw off calculations in at least certain types of quantum computers. The newly designed insulator solves this problem by keeping stray vibrations from traveling through it. At the same time, the conductive, wave-directing properties of its surface might enable new methods of quantum computing, where vibrations along the snowflakes play critical roles in how the computer talks to itself.

The researchers even raise the possibility of "integrated acoustic circuits" — classical computer chips where information travels in the form of sound, not electricity.

That's a lot of potential for what amounts to a simple star design, albeit shrunken down so that each star has a radius of just 1,800 nanometers — just twice as thick as a red blood cell.

The researchers haven't yet actually built such a snowflake slab, but they wrote that it shouldn't be too difficult using existing nano-fabrication technology.