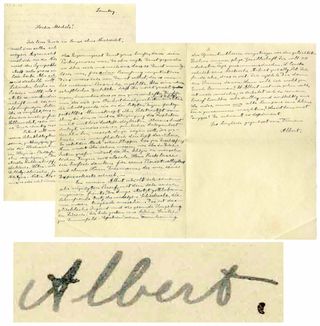 When a close friend of Albert Einstein committed murder, Einstein rushed to defend his character, according to a letter the Nobel Prize winner wrote that is hitting the auction block.

In the letter, written in German on April 29, 1917, Einstein reached out to his good friend Michele Besso, the only person Einstein credited in his paper on the theory of special relativity. In the note, Einstein wrote about general relativity, quantum physics and another friend Friedrich Adler, who was accused of murdering the Austrian Minister-President Karl von Stürgkh in 1916, during World War I.

Adler's trial took place within days of Einstein writing the letter. In the note, Einstein described Adler's personality and pondered how he could help him. [Einstein Quiz: Test Your Knowledge of the Famous Genius]

"A. proved himself a selfless, calm, hard-working, goodhearted, conscientious man who was highly esteemed by everybody, and that it is my heartfelt desire, therefore, to intercede for him," Einstein wrote of Adler.

However, Einstein added that Alder's disposition had a few downsides, too. "A. is a rather sterile rabbinical mind, obstinate, without a sense of the real," Einstein wrote. "Ultra-selfless with a strong tinge of self-torture, even suicide. A real martyr-type."

Alder had even written to Einstein on the theory of relativity, but Einstein didn't think highly of it, he wrote in the letter.

"I just received a manuscript on relativity from him [Alder], completed within the past few days, in which, with the conviction of the prophet, he broadly expounds quite worthless subtleties, so that I am painfully caught in the dilemma of how to respond to it," Einstein wrote. "I have been racking my brain about this. He keeps drawing on [Ernst] Mach's theories to the point of exhaustion."

Einstein asked Besso for advice, writing, "Well, I am sure you will know what chords to strike, since you are much wiser about human affairs than I am."

Einstein and Adler's relationship "was intertwined in both physics and socialism, so that it endured long beyond their school years. Very early Fritz [Adler] recognized that his new friend was a great scientist," according to a 1978 report in the journal German Studies Review.

However, while Einstein became famous for the theory of special relativity, Adler made news when he violently took issue with the authoritarian von Stürgkh. The murder happened just after von Stürgkh forbade the Vienna University faculty from meeting to discuss parliament, an action that "violated a hard-won freedom of assembly established in the 1880s," according to the report.

"Friedrich knew that the Count lunched every day at the Hotel Meissel and Schaden near the Hofburg Palace. So, on Saturday, the 21st of October, Friedrich went there for lunch, casually waited a few tables away until they had both finished dining and calmly shot Stürgkh," according to the report. "Within a few hours, Friedrich Adler was in prison, Stürgkh was dead, and the whole empire was appalled at the 'fanatic's deed.'" [Killer Chemistry: The Chemical Weapons of World War I (Photos)]

At trial, Adler was found guilty and sentenced to death, but he was never executed. "The government chose to avoid making him a martyr," according to the report. Instead, Adler was sentenced to 18 years of hard labor, but was pardoned in 1918 and "stepped out of prison a folk hero," the report said.

In the scribbled note, Einstein also defends his theory of special relativity, which he had published two years before in 1915. The scientist wrote, "L[evi-]Civita wrote a critical paper on gen[eral] rel[ativity]. I think however that he is wrong. I will tell you about it in the summer. When do you think I should visit you?"

The auction for Einstein's three-page note, held by Nate D. Sanders Auctions in Los Angeles, California, ends on Thursday (Jan. 25). The auction house has set the minimum bid at $22,000.