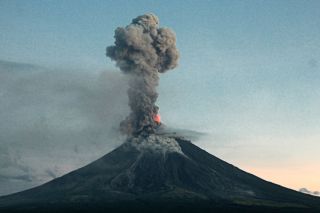 Update: Jan. 24, 10:35 a.m. EST — Between yesterday morning and this morning (Jan. 24), the Mayon volcano has launched five intense lava fountains from the summit crater, with these events lasting from 7 minutes to an hour and 24 minutes, according to the Philippine Institute of Volcanology and Seismology (PHIVOLCS). The fountains shot up 1,640 to 2,000 feet (500 to 600 meters) above the crater and generated ash plumes that were up to 3 miles (3 to 5 kilometers) high. Alert Level 4 remains in effect over the volcano. "The public is strongly advised to be vigilant and desist from entering the eight (8) kilometer-radius [5 miles] danger zone, and to be additionally vigilant against pyroclastic density currents, lahars [fast-moving volcanic flows] and sediment-laden streamflows along channels draining the edifice. Civil aviation authorities must also advise pilots to avoid flying close to the volcano’s summit as ash from any sudden eruption can be hazardous to aircraft."

Explosions shook the Mayon volcano, while fountains of lava spewed from its summit today (Jan. 22), causing the Philippines government to raise the hazard level from 3 to 4, indicating a violent eruption is imminent.

"Because of this, the Danger Zone is extended to an 8-kilometer [5 miles] radius from the summit vent. The public is strongly advised to be vigilant and desist from entering this danger zone," the Philippine Institute of Volcanology and Seismology (PHIVOLCS) said in a statement. "Civil aviation authorities must also advise pilots to avoid flying close to the volcano's summit as ash from eruptions can be hazardous to aircraft."

The ground around the summit has also been shaking, PHIVOLCS said. [5 Colossal Cones: Biggest Volcanoes on Earth]

Renato Solidum of PHIVOLCS and other officials said that the explosion, which occurred around noon local time, "sent superheated lava, molten rocks and steam cascading down Mount Mayon's slopes and shrouded nearby villages in darkness," the Guardian reported.

More than 27,000 residents in Albay Province have fled since Mayon began erupting a few weeks ago, according to the Guardian report. Just last week, an eruption sent red-hot lava from the volcano's mouth, so much that it gave the mountain a face-lift of sorts — the lava repaired damage to the southern side of the volcano from previous eruptions, restoring its iconic cone shape.

The Mayon volcano — which rises some 8,077 feet (2,462 meters) above the Albay Gulf — is the Philippines most active volcano, according to the U.S. Geological Society (USGS). Its steep upper slopes make it a popular, albeit dangerous, climbing spot.

In 2013, with no warning, the volcano burst to life in a so-called phreatic explosion, due to water seeping into the volcano's magma chamber and blasting out as steam. The explosion killed five climbers and injured seven. After several climbing fatalities on Mayon in the 1990s, the International Association of Volcanology and Chemistry of the Earth's Interior crafted safety guidelines for individuals on active volcanoes, Live Science previously reported.

Pyroclastic flows, or fast-moving surges of lava and other molten material, have commonly raced down Mayon's flanks from its summit, often devastating populations below, according to the Smithsonian Institution Global Volcanism Program. Its most violent eruption, in 1814, killed more than 1,200 people.