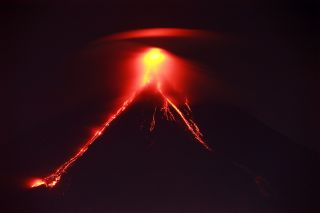 Lava cascades down the slopes of Mayon volcano on Jan. 15.
(Image: © CHARISM SAYAT/AFP/Getty)

A fiery eruption just gave the Philippines' most active volcano a face-lift, according to news reports.

Mayon volcano began spewing streams of red-hot lava yesterday (Jan. 15). The eruption continued today, sending out torrents of lava that flowed more than 1 mile (1.6 kilometers) away from the volcano's mouth, which prompted the evacuation of 21,000 people, according to CBS.

This lava has led to an unexpected consequence: It has repaired — at least temporarily — Mayon volcano's iconic cone shape, said Renato Solidum, director of the Philippine Institute of Volcanology and Seismology (PHIVOLCS), according to news reports. [5 Colossal Cones: Biggest Volcanoes on Earth]

In particular, the lava has fixed the volcano's southern side, which was damaged in previous eruptions, Solidum told GMA News, a Philippine news outlet.

However, the "face-lifted" crater could easily be destroyed again if today's eruption takes a more explosive turn, Solidum noted.

Moreover, now that the volcano's southern side has been healed, future lava flows could go down the volcano's north side, which would endanger people on that side, Solidum said.

In addition to lava, the eruption has caused nine separate tremors, four of which were accompanied by "short-duration lava fountaining," according to a PHIVOLCS update posted this morning.