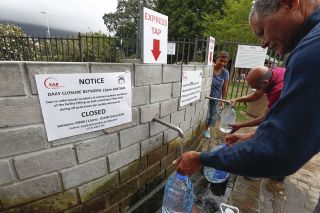 Officials in Cape Town are pleading with residents and visitors to save water, warning that the taps could go dry in the drought-stricken South African city by April.

To prevent such a crisis, residents of the city will see their daily water allowance slashed from 87 liters (23 gallons) to 50 liters (13.2 gallons) starting next month.

"There are only 95 days left before we reach Day Zero," Cape Town's mayor, Patricia de Lille, said in a statement on Monday (Jan. 15). "Day Zero is when the City will be forced to turn off most of the taps and every resident will have to queue for 25 liters (6.6 gallons) of water per day."

De Lille said that municipal authorities have been looking for new sources of water through wastewater recycling, desalinization projects and additional drilling for groundwater. But she warned that these water-conserving efforts won't stave off "Day Zero" in the short term. In tightening the water restrictions for individuals, the mayor reported that only 39 percent of Cape Town's nearly 4 million residents stayed under the 87-liter limit last week. [Dry and Dying: Images of Drought]

Under the new rules, taking a 10-minute shower would exhaust a person's water allowance for the day, according to South African broadcast station eNCA. The TV network calculated that to stay within the 50-liter limit and still have some water for drinking, a person would only be able to take a 2-minute shower, flush the toilet once, wash dishes in a sink once, wash their hands twice and cook once.

The Western Cape, where Cape Town is located, has seen three unusually dry rainy seasons in a row. The province was declared a disaster area in May 2017, with government officials saying the drought is the worst the region has seen since 1904.

Drastic changes in the water supply system can even be seen from space. In November, NASA released images showing how much water levels had dropped in the Theewaterskloof reservoir, the largest in the Western Cape's water supply system, in just three years.