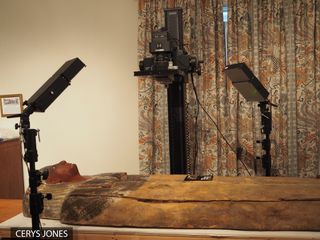 About 2,000 years ago, ancient Egyptians made homemade wrappings for mummies from "recycled" scraps of paper that people had first used to scribble down shopping lists and personal notes.

Scientists have tried a wide array of methods — many of them destructive — to try to first peel apart these papyri and then decipher the ancient writings on them. Now, in an effort to analyze the papyri without destroying them, researchers have used a high-tech camera to photograph the artifacts and study their text.

The camera is remarkably effective; it can noninvasively detect the famous "Egyptian blue," carbon-based pigment and other inks containing iron, said Adam Gibson, a professor of medical physics at University College London (UCL). [Image Gallery: Egypt's Valley of the Kings]

In ancient Egypt, mummies were embalmed and then wrapped in fabric bandages. Then, they were covered with cartonnage, a paper-mache material made from recycled papyri and sometimes fabric, Gibson said. Once the cartonnage hardened and was covered with plaster, artisans painted it.

Egyptians created papyri from reeds that grew in marshy areas surrounding the Nile River. Ancient people would use the resulting papyri to write notes about everyday life, including shopping lists, taxes, political notes and land surveys, according to previous analyses of mummy cartonnage made up of the notes, Gibson said.

Typically, Egyptian artifacts, such as statues, inscriptions and weapons, tell researchers about the lives of officials and royalty. In contrast, the papyri in the cartonnage offers a rare window into the lives of ordinary Egyptians, Gibson said."This is how we get information about normal people, rather than the rulers," Gibson told Live Science.

The researchers photographed different pieces of cartonnage with a camera known as a multispectral imaging system. Most cameras can detect three different wavelengths (red, green and blue), but this system can detect 12 wavelengths from 370 to 940 nanometers, ranging from ultraviolet to infrared light (visible light extends from 390 to 700 nm), said Gibson, who co-led the research with Melissa Terras, an honorary professor at the UCL Centre for Digital Humanities.

"That's useful, because different inks or dyes respond differently to different wavelengths, which is why we perceive them as different colors," Gibson said.

Moreover, some of the dyes fluoresce. "If you shine blue light on them, they might glow green or red," Gibson said.

Many of the 2,500- to 1,800-year-old papyrus notes are written in demotic, a script used in ancient Egypt, typically for writing business and literary documents. However, the researchers still have to find someone to translate the pieces of cartonnage they imaged, Gibson said.

In the meantime, the team, including UCL researchers Kathryn Piquette and Cerys Jones, applied the imaging technique to another Egyptian artifact: a coffin that dates to between 664 B.C. and A.D. 30, which is on display at a museum at Chiddingstone Castle, in the United Kingdom.

The images revealed the name Irethorru on the footplate of the coffin — something that was invisible to the naked eye. Irethorru was a common name in ancient Egypt, and means "the eye of Horus is against them." Horus is the deity Egyptians depicted as a falcon-headed man, Gibson said.

The new technique may help Egyptologists analyze all kinds of Egyptian artifacts without damaging them, he noted. "You can find some horrific videos on YouTube of people taking 2,000-year-old papyrus and laughing as they destroy it in order to read the text that's inside it," Gibson said.